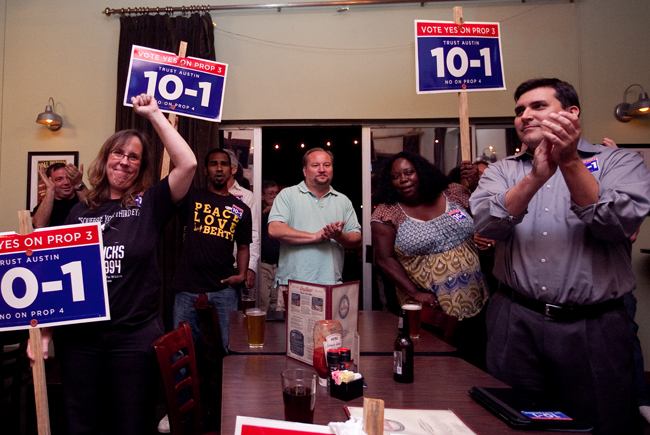 Proponents of the 10-1 plan await results on Proposition 3 and 4 at Opal Divine’s on South Congress Avenue. The 10-1 plan, which was passed Tuesday, will create 10 single-member districts for Austin City Council, along with a mayor elected city-wide, giving different areas of town a bigger voice on the council.

The structure of Austin City Council will undergo significant changes and may become more responsive to student opinion after voters chose Proposition 3 over Proposition 4 Tuesday night.

Although both Proposition 3 and 4 received more than 50 percent voter approval, Proposition 3 will automatically be adopted because it received a larger percentage of the vote. The approved plan will establish 10 voting districts in the city with one city council representative each, and one mayor elected citywide. The voting districts will replace the current at-large council system in which all seven council members are elected citywide and represent the entire city rather than specific districts.

Proponents of the 10-1 plan said the establishment of 10 geographical districts will give areas with large student populations a much greater voice in city council. John Lawler, urban studies senior and Proposition 3 advocate, said the 10-1 plan could even open the door for a student to run for city council.

“This is the first time in over 40 years [a student] may have the potential to win a seat on city council.” Lawler said. “I think people are going to look at this and notice that the student endorsement was a critical one.”

To draw the new districts, the 10-1 plan sets up a 14-member, independent redistricting commission. The commission will require representation that is diverse by race, gender, ethnicity and geography. One position on the commission will be open for a student.

Andrea Huerta, government sophomore and proposition 4 supporter, said although the 8-2-1 plan will not be implemented, the 10-1 plan will still be an improvement from the current at-large structure.

“Regardless of 3 or 4 winning, we’re going to have a better system than what we have right now so the point is to move forward.”

Currently, Austin is the largest city in the United States in which all members of the city council are elected citywide. Previous attempts to reform the structure of city council had failed with the most recent ballot measure occurring in 2002.