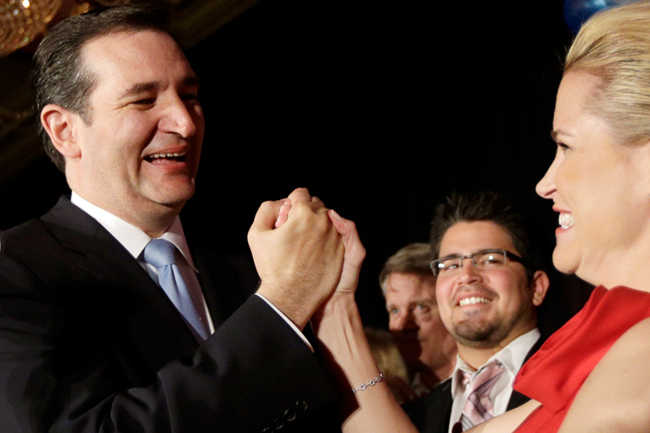 Cruz, a self-described “constitutional conservative” backed by the Tea Party, was a strong favorite to win the Senate seat throughout the race. A poll from the University of Texas and The Texas Tribune released last month showed Cruz with a 16-point lead over Sadler, 55 percent to 39 percent. Texas has not elected a Democrat to statewide office since 1994.

The race between Cruz and Sadler, a former state legislator and attorney, was relatively quiet in the months leading up to the election in comparison to the heated Republican primaries earlier this year. During the race, Sadler raised nearly $359,000 between July and September, a low figure compared to the $3.5 million Cruz raised.

Cruz will take over the seat vacated by Sen. Kay Bailey Hutchison, Texas’ senior statewide officeholder, who has been representing Texas in the Senate for more than 17 years. Hutchinson, who in 1993 became the first woman to represent Texas in the Senate, announced in January of last year she would not seek re-election in 2012.

If elected, Cruz pledged to do away with President Barack Obama’s health care reform and to lower the amount of spending in Washington. He also denounced Obama’s deferred action for undocumented youth and opposes the DREAM Act, legislation that would legalize certain young, undocumented immigrants.
Cruz also favors strict voter ID laws that require voters to show identification. According to his website, Cruz will aim to pass a balanced budget amendment and reduce government size and spending during his term.

During the Republican primaries in July, Cruz was able to score a surprising victory over Lt. Gov. David Dewhurst, who was considered the race’s frontrunner throughout the majority of the primary. Despite having never run for public office and being relatively unknown in Texas, Cruz decided to take on Dewhurst, who spent $19 million of his own money on his campaign and had the support of several Texas Republicans, including Gov. Rick Perry.

During his campaign to win the primary, Cruz was backed by the Tea Party and drew support from former U.S vice presidential nominee Sarah Palin and money from national conservative groups.

Cruz is the former Solicitor General of Texas and was the first Hispanic to hold that position. He has argued nine cases before the Supreme Court, among which he successfully defended the Ten Commandments monument on the Texas State Capitol grounds and the recitation of the words “under God” in the Pledge of Allegiance in public schools. Cruz is also a former adjunct law professor at the University of Texas, where he taught U.S. Supreme Court litigation.