New coach, returning players ready to take this team to the next level 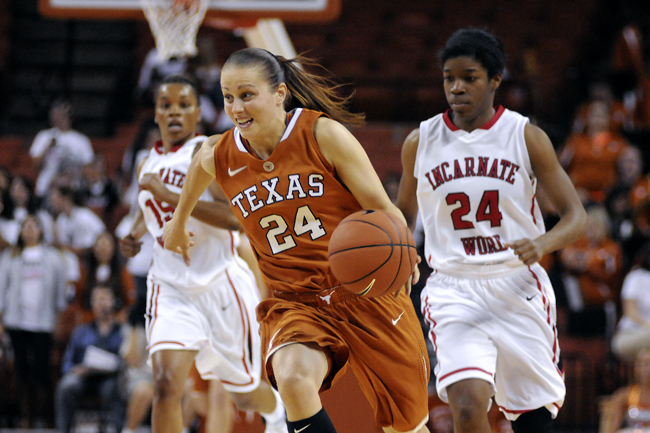 Junior guard Chassidy Fussell returns for the Horns after scoring 520 points in her sophomore season.  Fussell is among a roster of returning talent as new head coach Karen Aston steps in.

One year ago this time, the women’s basketball team was gearing up for the start of its season. As they do the same right now, a lot has changed for this Texas team.

After Gail Goestenkors’ resignation last season, the team hired head coach Karen Aston. Aston was an assistant to Jody Conradt for eight years at UT-Austin before she began her head coaching career at Charlotte and then North Texas.

With Aston came a whole new coaching staff. She wanted to put a big focus on conditioning so she hired Shaun McPherson as the strength and conditioning coach. Aston added Jalie Mitchell and George Washington as assistant coaches, Angela Ortega as director of basketball operations and other special assistants.

While the coaching staff might have changed, the Texas players are back and eager to get their season started. The team is returning 57 percent of its scoring and 53 percent of its rebounds from last year. Key returners involve preseason All-Big 12 Honorable Mention Chassidy Fussell, who was the team’s leading scorer last year, and leader Nneka Enemkpali.

“Nneka Enemkpali has been extremely impressive to me,” said Aston. “She’s become consistent with her work ethic and that’s a big thing for me. Also, Chassidy Fussell is a scorer, her mentality is to score and that will never go away.”

However, Aston has her eye on many new players who have just arrived on her court. One of these athletes is Nadia Taylor, who played softball for UT for the last four years before she decided to come back to basketball.

“[Taylor] is a player and a young lady that has gained an enormous amount of respect from myself, my staff and her teammates,” Aston said. “To have been away from the game for that long of amount of time and played a sport that is dramatically different from a conditioning standpoint and just throw yourself in there and do the best you can do, you have to admire that as far as her amount of minutes. I think there is a learning curve with having been away from the game.”

Nevertheless, Aston isn’t afraid to play these young players who have just arrived right away. After multiple injuries she might not even have a choice as many newcomers might get thrown into the starting lineup. However, she believes they have proved they can be there.

“Starting with the newcomers, I think they’re all going to play a considerable amount,” Aston said. “We’re still dealing with some issues with injuries, and I think it’s going to force these young players into action quickly. Some will be ready. Some are going to learn by experience and getting thrown into the fire. In particular, our young guards.”

On Friday, the Longhorns, who were ranked fourth in the Big 12 preseason poll, face off against St. John’s University in the WPI Tip-Off Classic to start their 39th season. This is the second consecutive season the Longhorns have challenged themselves immediately out of the gate with a season opener against a ranked opponent.

In Daytona Beach, Fla., where the WPI Tip-Off Classic is hosted, Texas will face the Red Storm for the second time in the team’s history. Its first meeting back in 1978 ended with a Texas win. While in the Sunshine State, the team will also face Hofstra University on Saturday in its first meeting of all time.

With all of the changes and multiple key returns for the Longhorns, this season looks encouraging. After a loss in the first round of the NCAA tournament last year, this young Texas team is prepared and enthusiastic to get back on the court to prove it can do better.

Printed on Thursday, November 8, 2012 as: Roster lauded by coach