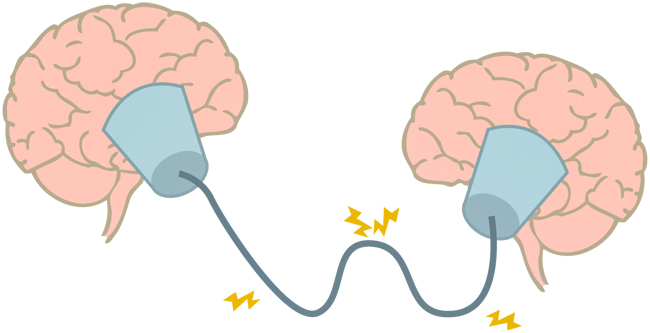 Make up your Mind
Split-brain patients — those who have had the connection between the hemispheres of their brains severed to prevent seizures — act normally except in specially designed experiments, which reveal two separate brains inhabiting the same skull: depending on how a question is posed, the patients give completely different answers. Fifty years after he first studied these patients, Michael Gazzaniga of the University of California, Santa Barbara has published a new study on the same phenomenon, albeit in non-split-brain subjects. For the experiment, he flashed real and fake words to either the left or right visual fields of his subjects and found that the latter resulted in more correct identifications (as the right visual field corresponds to the left, language-processing, hemisphere of the brain). While doing this, Gazzaniga and his research assistants also employed magnetoencephalography, a technique for monitoring subjects’ brains with a time resolution of 512 frames per second — much faster than a functional MRI (half a frame per second) or even a Hollywood movie (24 frames per second). This technique, along with the specific experiment, should lend insight into how the two hemispheres of the brain communicate with each other.

Einstein pwned
MIT’s Game Lab has released a free open-source first-person 3-D computer game titled “A Slower Speed of Light,” which models the effects of relativity on a level that players can intuitively understand. As players gather more orbs, the speed of light slows down, resulting in Einsteinian effects corresponding to the players’ movements, including red- and blue-shifted colors, perception of time changing relative to the outside world and the warping of space. While the game is unlikely to compete with “Halo 4,” it provides an interactive world in which players can see relativity in play, brought to life in a way that can’t be done using formulas on a blackboard. Additionally, the programmers have made the game’s engine open source, allowing others to potentially develop more action-packed and exciting games that take place in this relativistic environment. “A Slower Speed of Light” is available now for free to download and play on Windows- and Mac-based systems.

Upbringing sways cooperation
The cornerstone of game theory research is a scenario referred to as the prisoner’s dilemma, which has many variations but is usually based on a few simple rules designed to test how people cooperate and whether they trust one another in different circumstances. Two players — the prisoners — are given the option of either cooperating with each other or ratting the other prisoner out and defecting, without knowing what the other will do. If they both cooperate, they are both rewarded, whereas if they both defect, they are both punished. However, if one cooperates and the other defects, the cooperator is punished worse than if they both defect, and the defector is rewarded more than he is if they both cooperate. In other words, it’s always best for the individual to defect, but overall better for both if they cooperate. New research suggests that male players raised among conflict or violence were 9.2 percent more likely to defect and 4.5 percent more likely to retaliate against a non-cooperating opponent, likely a result of growing up in an environment where relying on the kindness of strangers is a recipe for disaster. Surprisingly, however, this effect wasn’t observable in female players with similar backgrounds.

Eye contact
Eyes don’t just provide a window to the soul — they also give us something to look at when we talk to others. However, it was unclear in the past if our gazes are drawn to the peepers themselves or just to their central location on the other person’s face. Alan Kingstone of the University of British Columbia was stumped by this question as well as how to investigate it, so he asked his ninth-grade son, Julian Levy, for input. Levy came up with a simple and elegant solution: use images of monsters from “Dungeons and Dragons.” Some of the monsters from the popular dice-rolling game are human-like, with eyes in the middle of their faces, but many are not. By categorizing the creatures along these lines and tracking the eye movements of subjects confronted with them, Kingstone and Levy determined that people start by looking at the middle of faces then move quickly to the eyes, which they stay focused on.