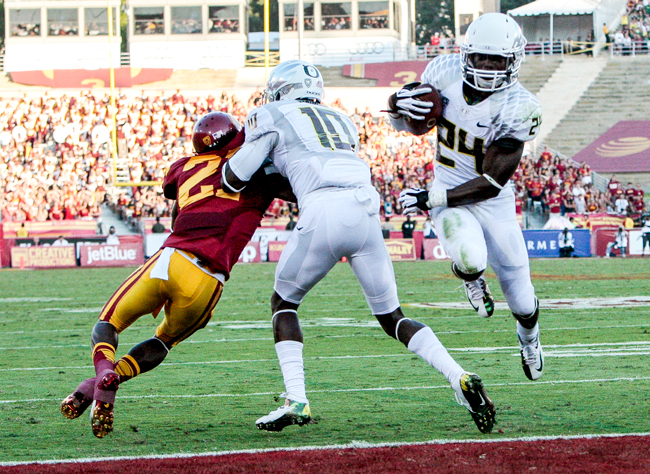 What was once a one-man race for the Heisman now has a second in contention. Barner has pulled even with Klein with his extraordinary game against USC. In the most important game of the season thus far for the Ducks, Barner had one of the best single-game performances not only of this season, but in the past few years. He set a school record for rushing yards in a single game, and led an offensive output that had never been put onto a USC team. Oregon stays on the road this week and travels to Berkley to face Cal. After that, the deciding point of Oregon’s schedule begins. It plays Stanford and Oregon State, both of which are ranked. If Barner continues to play the way he did against USC, then he will almost definitely jump Klein, especially with Kansas State only having one ranked game left, and Oregon having two more with a likely Pac 12 championship game. The Heisman race just got a lot more interesting.

Klein continues to put together the same stat sheet in almost every game. He is basically guaranteed 200 yards passing and 70 yards rushing in every game. The only knock on him is that he is not as flashy as Barner is and that could hurt him as the games get more and more important. Additionally, Klein’s injury could come into play if it restricts his play. Klein has two more conference road games left until the season finale against Texas at home. TCU will provide a tough test, but Baylor’s defense should wilt under the kind of pressure that Klein and the Kansas State offense will put on it.

Notre Dame survived a letdown game at home against Pitt last week following its big win over Oklahoma. Pitt was the first team to score at least 20 points on Notre Dame this season and finished with 26 after the overtime periods. This was also the first time Te’o finished with less than at least 10 tackles since a September contest against Michigan. Plus, with Oregon’s trouncing of USC last week, Notre Dame has been jumped in the poll, and needs some help. The main problem for the Irish right now is that their remaining schedule isn’t very imposing. Boston College only has two wins on the season and Wake Forest only five. The worst thing that could’ve happened to his campaign was for USC to lose as much as it has. Beating the Trojans would give them four losses. Te’o no longer controls his own destiny and needs some help in both the National Title and Heisman chases.

In Alabama’s marquee game of the season, McCarron came through and led the Crimson Tide to the come-from-behind victory over LSU. McCarron was sluggish to start out the second half, but he commanded Alabama down the field completing four of his five passes on the seminal drive. Alabama’s offense could only get 331 yards against LSU’s defense, while giving up 435 yards to the Tigers. Now McCarron and Alabama have to be leery of a letdown game against a Texas A&M team that has enough offense to upset the Crimson Tide if it isn’t ready for the game. McCarron needs for others to lose if he is going to win the Heisman. His numbers aren’t impressive enough to vault him over the rest of the field.

Season: 124-for-218 (57 percent) for 1753 yards, 14 touchdowns and six interceptions. 174 rushes for 1166 yards (6.7 yards per carry) and 13 TDs
Miller continues to stick around in the Heisman race, but it seems like he is sliding. Ohio State simply isn’t getting the attention he needs to make a move to impress voters. The Buckeyes are on probation, so the national focus isn’t on them. Another thing that is hurting him is that the Big Ten’s reputation has taken a massive shot this season, so even though Ohio State continues to win, it isn’t getting any credit. The Buckeyes have only played two teams that were ranked at the time they played. And there are currently only two ranked teams in the Big Ten, excluding Ohio State. Miller has been a one-man wrecking machine for Ohio State and is the main reason it is still undefeated. But his numbers aren’t shocking enough to make up for the lack of publicity he and the Buckeyes are getting.