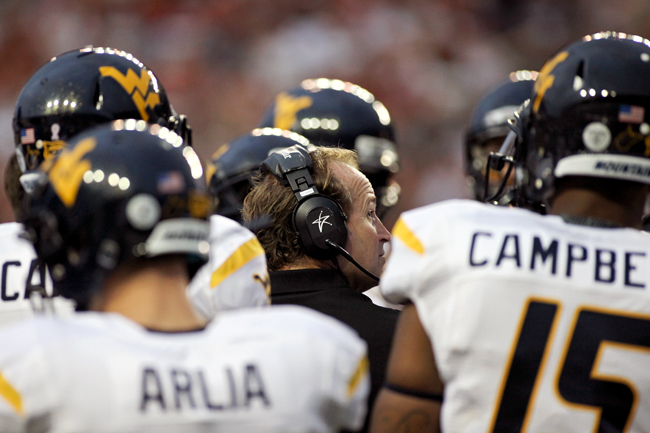 West Virginia head coach Dana Holgorsen will face the team he was offensive coordinator for during the 2010 season this weekend when the Mountaineers play Oklahoma State in Stillwater, Okla.

With November in full swing, the conference remains Kansas State’s to lose. As the season enters the final few weeks of the regular season, the Big 12 will see its fair share of crucial games. Let’s take a look at some of the conference notes heading into the weekend.

• Kansas State senior quarterback and Heisman frontrunner Collin Klein is expected to start this Saturday when the Wildcats visit TCU. Klein missed a good part of the second half versus Oklahoma State last weekend, presumably due to a concussion. Freshman Daniel Sams would start if for some reason the senior can’t go. The dual-threat Sams completed five of six passes for 45 yards in place of the injured Klein last week versus Oklahoma State.

• TCU head coach Gary Patterson is a former Kansas State linebacker and was almost a shoe-in for the head coaching job after the Wildcats fired Ron Prince following the 2008 season. This Saturday’s game in Fort Worth will mark the first time Patterson has coached against his alma mater.

• The Sugar Bowl will host the winners of the Big 12 and SEC starting in 2015 in what is dubbed as the “Champions Bowl.” Both schools will split an $80 million payout, the same amount divvied up between the Rose Bowl participants.

• Nebraska and Oklahoma have a tentative agreement to begin a home-and-home series in 2021, the first game taking place in Norman before heading to Lincoln in 2022. The series would renew one of the oldest rivalries in college football, dating back to 1912. The Sooners lead the series with a 45-38-3 record. The Cornhuskers moved to the Big Ten after the 2010 season.

• When West Virginia visits Oklahoma State this weekend, two teams with extremely similar philosophies will be teeing off. Mountaineers head coach Dana Holgorsen spent the 2010 season as the offensive coordinator in Stillwater, and after so much success the Cowboys didn’t change too much after Holgorsen left for Morgantown. West Virginia defensive coordinator Joe DeForest spent the last 11 years as the safeties coach and special teams coordinator at OSU. Running back and quarterback coaches Robert Gillespie and Jake Spavital also have stints in Stillwater. The game at Boone Pickens Stadium will feature the Nos. 2 and 19 total offenses, respectively.

• Oklahoma head coach Bob Stoops and former Oklahoma head coaching legend Bud Wilkinson are tied with 145 career victories apiece heading into the weekend. Both are in the club of 14 head coaches in history with an .800 winning percentage, with at least 10 years in the saddle. Wilkinson led the Sooners to three national championships in the 1950s before taking his leave to run for the U.S. Senate.

• Kansas quarterback and BYU transfer Jake Heaps is sitting out this year due to NCAA transfer rules. Heaps, a former five-star recruit, will look to revitalize the Jayhawks next season after being able to fully partake in Kansas’ offense during his time on the bench. Freshman quarterback Michael Cummings, who replaced senior Dayne Crist, has passed for 318 yards, one touchdown and four interceptions in five games this season.