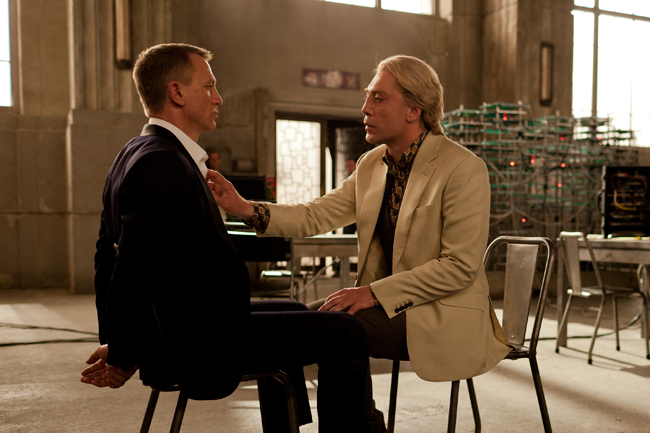 Fifty years after the iconic secret agent ordered his first martini, shaken, not stirred, we find the Bond franchise at an impasse. “Casino Royale,” Daniel Craig’s series debut, was one of the best in recent memory, but the sequel, “Quantum of Solace,” was rushed and undercooked. The meltdown of MGM derailed the franchise for a few years, but four years later Bond is back in “Skyfall,” a film that works to define Craig’s legacy as Bond, even as it takes the time to look back at the history of both the franchise and the character.

In a rip-roaring opening, James Bond (Daniel Craig) is accidentally shot and presumed dead by fellow operative Eve (Naomie Harris) as they attempt to reclaim a stolen hard drive containing the secret identities of undercover MI6 agents. In his absence, terrorist Silva (Javier Bardem) attacks MI6, targeting Bond’s mentor M (Judi Dench). Springing back into service after an overseas respite, Bond finds himself shakier, less alert and in the crosshairs of a bloody vendetta against MI6.

Director Sam Mendes is best known for domestic dramas “American Beauty” and “Revolutionary Road”, but he’s always been willing to try new things in the process of developing his voice, and his collaboration with cinematographer Roger Deakins is extremely fruitful. Much of “Skyfall” is concerned with how agents like Bond can function in a world so reliant on technology, and the film is shot with deliberate thematic purpose, casting Bond as the shadowy figure keeping the world safe. Mendes and Deakins also stage the hell out of their action sequences, impressing with an opening scene that easily fits among some of the best Bond pre-credits sequences ever and a stunningly beautiful pair of action scenes set in Shanghai that lends the film its most indelible images.

In addition to exploring how Bond fits into this world, where hackers are quickly becoming the most useful secret agents, “Skyfall” delves into Bond’s history, two rich themes that give the film an outstanding purpose and resonance. Without spelling too much of the character’s history out, “Skyfall” gives us a sense of where Bond came from and how MI6 shapes its agents. Craig continues to impress as Bond, and the remarkable physicality and suaveness he brings to the role is tempered with an uncharacteristic insecurity as Bond struggles to get on top of his game. Craig seems to know Bond inside and out by now, and “Skyfall” gives him plenty of new notes to play without compromising Craig’s unflappable cool.

What can really make a Bond film stand out is a great villain, and once Javier Bardem is introduced into the “Skyfall” equation more than an hour into the film, things really start to get interesting. Bardem won an Oscar in 2008 for playing a terrifying assassin in “No Country For Old Men,” but it would be wrong to accuse him of repeating himself here. His villain is much more vibrant, driven by a desire for revenge against MI6, and Bardem is fantastic, instilling the character with a sharp wit, an eye for creating chaos and a surprisingly personal bloodthirstiness.

Judi Dench has been playing M, the head of MI6, for seven films now, and “Skyfall” makes her surprisingly instrumental to the plot. More than ever before, Dench is playing not just a secret agent but also the public face of her agency and the guiding force for all of her operatives. The rest of the supporting cast are mostly new characters settling into the archetypes that have defined the Bond franchise, and Ben Whishaw’s charming take on Q, Bond’s gadgets man, stands out. Unfortunately, “Skyfall” lacks a strong Bond girl, but Naomie Harris and Bérénice Marlohe both manage to look stunning and register some chemistry with Craig, although they fail to make a strong impression.

Thanks to some legitimately inspired touches from Sam Mendes, “Skyfall” is a highlight of the Bond franchise, an appropriately touching and retrospective look at Bond’s past that also charts a course for his (and the franchise’s) future. Featuring some of the most beautifully staged action scenes in the series’ history, a memorable villain and a strong, well-rounded cast, “Skyfall” is the Bond film at its best.