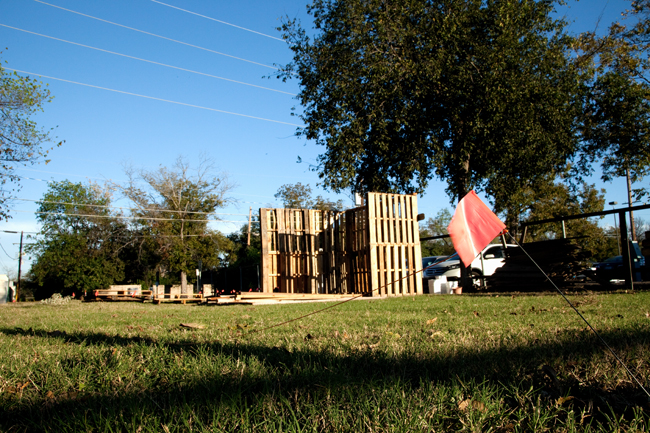 Students are hoping to finish the tool shed at the UT Micro Farm at the farm’s second workday this weekend from 9:30 a.m. to noon.

UT’s Micro Farm is off to a not-so-micro start.

The project is aimed at growing food locally on campus for UT’s dining halls, an on-campus farm stand and a nearby food shelter. It is funded by the Green Fee committee, a group that funds environmental service-related projects on campus.

Located at 2204 Leona St., the project held its first work day last weekend, and it will have its second work day Saturday from 9:30 a.m. to noon. Daniella Lewis, architecture senior and Micro Farm lead coordinator, said the work day had a big student turnout last weekend, when they started focusing on the infrastructure of the farm.

“This weekend we hope to finish our tool shed,” Lewis said. “It will make the site a home.”

Lewis said discussion about the project’s future is part of the work day.

“We have a plan, but that plan is changing every week depending on different people’s inputs,” Lewis said. “We want as many different people to voice their opinion as possible.”

She said some of the different plants the Micro Farm will grow include jalapenos, tomatoes, herbs and squash, among others.

“It’s really exciting to get everything started,” Lewis said. “There is ample student interest that is really energizing. Students are coming out, getting engaged and pushing their opinions and ideas. They want to do more than just help.”

Lewis, who previously saw the expansion of the Concho Community Garden this past summer, said she was happy and excited to see another student-driven project start so soon.

“I don’t think there is a more flexible project on campus,” Lewis said. “I have never seen one when students so physically have the ability to make an impact, and we are in our very first few stages.”

Robert Mayberry, Division of Housing and Food Service executive chef, said if the Micro Farm project is successful, it will have an impact on UT’s food system.

“Extreme freshness means better taste and nutrition. Veggies grown just a few blocks away will require very little fuel to transport, and this will be a teaching facility,” Mayberry said.

The Campus Environmental Center will use the garden to teach gardeners how to grow vegetables. Mayberry said he is excited about the upcoming yield of crops.

“I am a huge fan of local and fresh veggies, and the Micro Farm represents the potential to serve fresh, seasonal, campus-grown produce right here in our dining facilities,” Mayberry said. “I really look forward to cooking up that first batch of veggies from the Micro Farm.”

DHFS is working with Lewis and students on the project, and environmental specialist Hunter Mangrum said this was a good step in the right direction for food service.

“We are very excited to get out there and get our hands dirty, as well,” Mangrum said. “We’re going to be out there working and sweating, as well.”