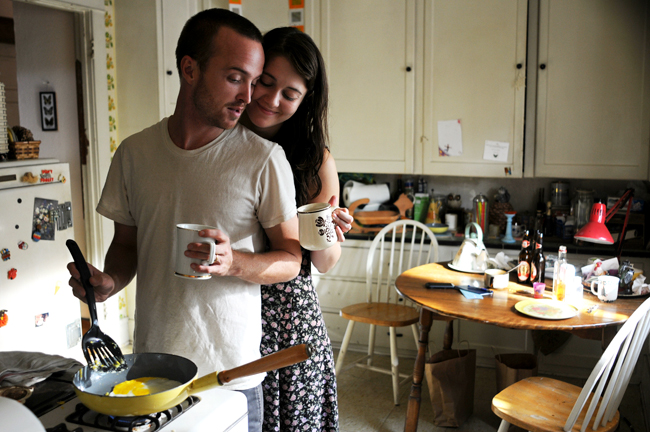 November is apparently the month of the alcoholism message movie, and between last week’s harrowing “Flight” and Sony Pictures Classics’ unsettling “Smashed,” the topic has been getting a lot of play on the big screen lately. It’s hard not to draw comparisons between the two films, but “Smashed” is an entirely different animal, a much more simplistic but emotional portrayal of a marriage collapsing under the harsh light of sobriety.

Alcohol has always been a factor in the relationship between Kate (Mary Elizabeth Winstead) and Charlie (Aaron Paul), and the two are already deep in a mutually propulsive spiral when the film begins. After Kate, a first grade teacher, vomits in front of her class, she begins to realize she may have a problem. With the help of co-worker Dave (Nick Offerman), Kate begins to take steps toward recovery, something that pushes her apart from her husband even as it helps her gain control of her life.

Mary Elizabeth Winstead is a consistently unpredictable screen presence, and it’s never certain if she will be the dull, pretty face of “Death Proof” and “Abraham Lincoln: Vampire Hunter” or the interesting performer from “Scott Pilgrim vs. the World.” Fortunately, “Smashed” may be her best showcase yet, a role without any room for vanity or self-awareness, and Winstead throws herself into it admirably. The film essentially asks her to play two different people, and the animalistic depravity of Kate in the film’s opening is a marked difference from the clarity and focus she has once she starts attending AA meetings. Winstead is powerful and understated here, and she shows off a surprisingly effective dramatic skill set.

Unfortunately, “Smashed” spends the majority of its runtime focused almost exclusively on Winstead, and that small scope ends up drastically hurting the film. At only 75 minutes without credits, it’s hard not to feel a bit cheated having plunked down the money for a full ticket only to get about two-thirds of a movie. The film’s central tension focuses on Kate and Charlie’s marriage, but we never really get a sense of Charlie as a character. As good as Paul is, Charlie never ascends beyond a paper-thin enabler, the soft-voiced devil on Kate’s shoulder. There’s no reason for the audience to invest in their marriage, and the film’s climax jumps to a foregone conclusion without giving us any reason to care about it one way or another.

Director James Ponsoldt, who co-wrote “Smashed”’s script with Susan Burke, displays a stronger sense of his story and characters behind the camera. The film’s look is notable, especially for the stark visual contrasts Ponsoldt brings to Kate’s levels of sobriety. When she’s drunk, the camera takes an impressionable lilt, becoming more and more erratic the more Kate imbibes, and her sober scenes are met with steadiness and a more restrained aesthetic. It is an interesting, creative way to approach Kate’s struggle and a subtle visual signature for Ponsoldt.

Although “Smashed” suffers from its slightness, it’s still a well written and directed film that never veers into sentimentality. There’s no sugar-coating of alcoholism here, and although many of the film’s supporting characters could have used some fleshing out, actors like Offerman, Paul and Octavia Spencer still impress. Even though there’s a lot to like about the film, there’s so little to it that it’s hard to recommend a pricey theater viewing. However, its scale is so small and its struggles so quiet that it could make for an even more effective experience on video, and it’s certainly worth what little of your time for which it asks.