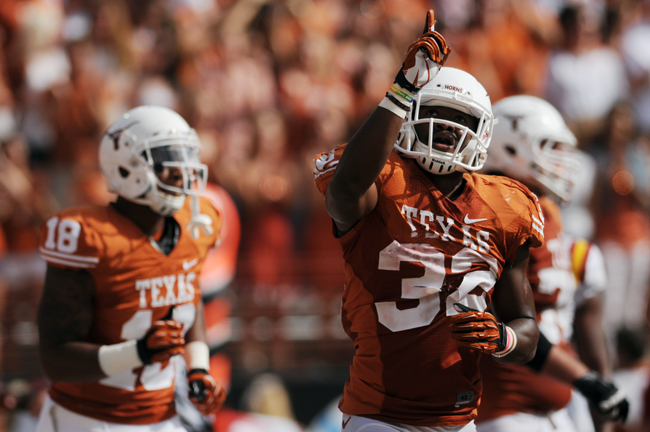 Texas running back Jonathan Gray celebrates after scoring a touchdown in the fourth quarter.

The Longhorns wore Darrell K Royal’s initials on their helmets to honor the former coach who died on Wednesday.  Flags flew at half-mast and it was a somber day at the stadium named after him. But, the way that Texas played was also a tribute to Royal.

Despite struggling with inconsistency this season, especially in early games, the Longhorns found their rhythm on both sides of the ball and defeated the Iowa State, 33-7.

The Texas offense was balanced throughout the game, thanks to the dominating play of the offensive line. Quarterback David Ash had his best game of the season and went 25-for-31 with two touchdowns and 364-yards, a season high.  He didn’t have an incompletion until his twelfth pass.

“Our job was to try to spread them out a little bit by putting the ball on the outside and utilizing the wide receivers,” said offensive coordinator Bryan Harsin. “They’re a very difficult team to run the ball on consistently so you have to mix it up and that’s what we did tonight.”

While Mike Davis has become Ash’s go-to target, both he and Jaxon Shipley stepped above the rest of the wide receivers and the two combined for 250 receiving yards.

Running back Malcolm Brown played for the first time in six games, but Joe Bergeron and Johnathan Gray retained their ownership of the backfield.  Bergeron had 86-yards and Gray had 75-yards and a touchdown.  The offense had 609-yards of total offense.

“All the coaches said, ‘It’s Wednesday, and we don't have one.  So what are we going to do?’ So these crazy young coaches come back to me with a double-reverse pass,” Brown said.

The Longhorns didn’t score on the drive, but the first quarter gave the Longhorns a big advantage.

Texas went up by two scores after a 5-yard touchdown run by Gray and a 61-yard touchdown pass from Ash to Davis.  In the second quarter, Ash hit Barrett Matthews for a three-yard touchdown on the tight end’s first reception of the season.

Brown was happy with the defense’s play in the game.  But, he was not pleased with the timing of Iowa State’s score.  Quarterback Steel Jantz found wide receiver Quenton Brundrage for a 14-yard touchdown with 41 seconds left in the half to make the score 20-7.

Texas’ defense continued its solid play and held the Cyclones to 277-yards and they were three of 12 on third down conversions.  The Texas offense went eight of 14 on third downs.

“To me the game came was about third down,” said defensive coordinator Manny Diaz. “They couldn’t get us off the field and they couldn’t stay on the field when it got to third down.”

The biggest play the defense allowed was a 23-yard pass from Jantz to Chris Young.  Corner back Carrington Byndom caught his third interception of the season and Josh Turner also had one at the end of the game. Defensive end Alex Okafor had nine tackles.

Kicker Nick Jordan replaced Anthony Fera at kicker and scored a 37-yard field goal for the only points of the third quarter.  With the help of the field position gained after an incredible 38-yard catch by Jaxon Shipley that deflected off Iowa State’s cornerback, Gray scored his second touchdown of the game on a 13-yard run.  Jordan concluded scoring in the game with a 25-yard field goal with 1:23 left in the game.

Texas now holds a four-game winning streak heading into its bye week.  This game was more than just getting Texas its eighth win.

“We really needed to win this game, not only for us but for him,” Shipley said. “We needed to dedicate this game to him and I think that played a key part and really motivated us.”