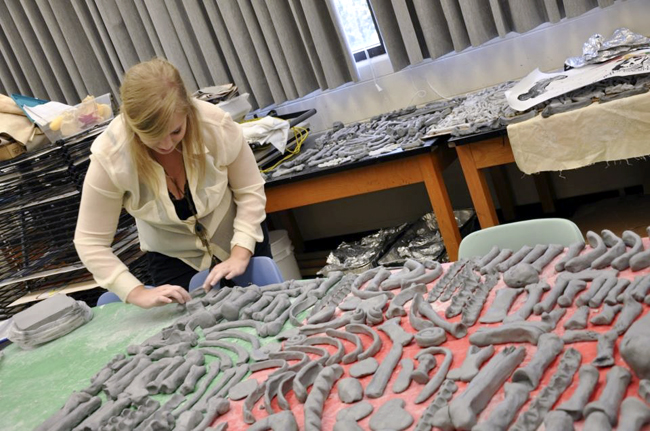 Clay bones made by UT students and community members will be on display this Tuesday in the South Mall. The bones were made for the project One Million Bones which promotes awareness of genocide in Africa. Photo courtesy of Jenny Nguyen.

UT students and their collaborators will lie 6,500 to 7,000 clay bones on the grass of the South Mall Tuesday. The area usually populated by students studying in the sun will be transformed into a symbolic graveyard of sorts as handmade bones are laid down as part of the national art activism project One Million Bones.

Started by artist Naomi Natale in New Mexico, the UT installation of clay bones is only the latest in a string of nationwide “One Million Bones” projects that span from New Orleans to New Jersey.

One Million Bones is a collaborative art endeavor that aims to promote awareness of genocide and daily atrocities occurring in the Democratic Republic of the Congo, Sudan, Somalia and Burma. Ultimately, the bones made by UT students will be combined with more than 900,000 other bones in Washington D.C. as part of the largest One Million Bones exhibit in 2013. Through the sheer number of bones present on the South Mall, the UT exhibit hopes to serve as a visible reminder of the staggering loss of life within these African communities.

“The bones symbolize that beneath every person’s skin, we’re all the same, and also helps us to remember victims and survivors from these atrocities while representing hope for the future at the same time,” education junior Julie Zhang said.

Zhang, who estimates she has made approximately 400 bones, is one of eight students in Kara Hallmark’s visual art studies service-learning course that are responsible for putting together the event. As part of the class, these students have organized bone-making sessions on campus and as well as sessions with elementary school students, museums and professors at Southwestern and Temple Colleges.

Hallmark, the course instructor, was hired by Natale as the Central Texas state coordinator for the project after helping graduate student Matthew Remington organize the first One Million Bones display in Austin at the state capitol last spring. The role art could play in promoting social justice intrigued Hallmark, who had previous experience with service-learning in the K-12 system.

“A project like this will create within you a deeper sense of connection with the situation,” Hallmark said. “Art has a way of doing that. It’s that visceral experience in conjunction with knowledge, stories, photographs and video.”

While an intriguing idea in practice, making 10,000 bones for social justice is no easy feat. Hallmark said that in addition to meeting for six hours every week, most students spend countless hours outside of class making bones.

Psychology senior Brianna Herold, Hallmark’s student and the project manager for the UT installation, noted that while time consuming, the project affects everyone it touches.

“Whatever the outcome may be of our total bones or the amount of bones that make it to D.C. in the spring, anyone who has been involved in the project in any form has been affected and inspired,” Herold said.

For Zhang, the effect of the project is already noticeable.

“Before I started on this project, my level of awareness about these genocides and conflicts was at a much lower level, I knew that these atrocities existed in certain countries, but I didn’t know which specific countries and to what extent,” Zhang said. “Through the process of working on this project, I learned more about how people around the world are suffering from these kinds of events and how much they need our help.”

For One Million Bones, the aim of these installations is als to make a significant contribution toward enacting positive change as well.

For each bone made, One Million Bones, in collaboration with Students Rebuild and the Bezos Family Foundation, donates $1, until they reach $500,000, to the CARE foundation, which works in the Congo and Sudan to enact change.

When the bones are laid down this Tuesday at 11 a.m., primetime for students rushing to classes, Hallmark hopes students take the time to stop and participate as well.

“When we did this the first time, many people joined in and participated spontaneously. I hope that will happen here,” Hallmark said.  “The bones are powerful in large numbers, both visually and symbolically. I hope that students who participate that day have the opportunity to see how art can be a vehicle for social justice as well as the symbol of the bone moving us toward a future of change.”

Printed on Monday, November 12, 2012 as: Clay art to symbolize genocide