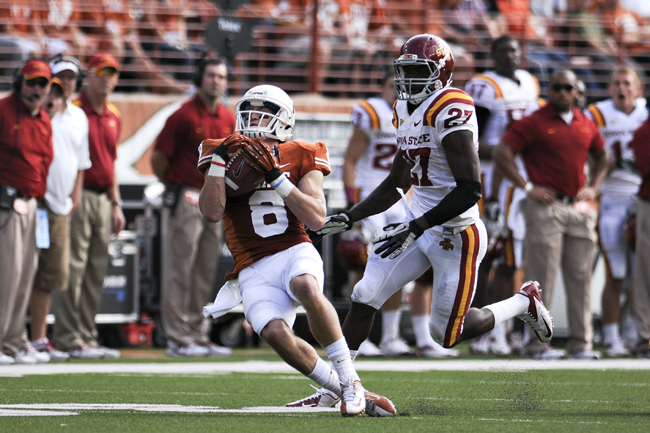 Sophomore Jaxon Shipley makes a catch against Iowa State on Saturday afternoon. Shipley had 137 yards on eight receptions. After several games of inactivity, Shipley turned in a convincing performance.

The Longhorns played their best overall game in conference play.

The offense was explosive en route to 609 yards, and David Ash was excellent. He completed 81 percent of his passes, throwing for 364 yards and a pair of touchdowns. The Longhorn rushing attack was also potent, pounding a stout Iowa State front seven for 222 yards on the ground.

Texas’ defense also put on its best display since the non-conference schedule. The Longhorns held the Cyclones to only 277 yards of offense and seven points.

Quarter by Quarter
First: The Longhorns made a fitting tribute to Darrell K Royal, lining up in the wishbone on the first play of the game. But they scored touchdowns on their next two possessions. The first came on a five-yard Johnathan Gray run, and the second on 61-yard touchdown pass to Mike Davis.
Second: Texas’ offense slowed down a bit, scoring only on a pass to Barrett Matthews, but an Anthony Fera field goal attempt was blocked. The defense allowed its only touchdown of the game in the quarter, when the Cyclones scored with just 41 seconds remaining in the half.
Third: This was the slowest moving quarter. Only three points were scored on a field goal by Nick Jordan, who replaced Fera as the place kicker. Neither offense had much success moving the ball. Fourth: The Longhorns iced the game in this frame. Texas had the ball for just under 12 minutes of the quarter as the rushing attack imposed its will. Case McCoy also saw some snaps in relief of Ash late in the game, throwing for 23 yards.

By the Numbers
47: The number of yards Texas’ opening play from scrimmage went, as the Longhorns lined up in the wishbone in honor of Royal.
38:12: Texas’ time of possession in the game. The Longhorns held the ball for 64 percent of the contest.
364: Number of passing yards Ash had Saturday, a career high.
7: Davis’ rank on the Longhorns all-time receiving yards list after his 113-yard performance.

Stock Up
Jaxon Shipley: Early in the season the sophomore wide receiver was Ash’s favorite target, but as the season has worn on, Shipley has seen less and less of the ball.
That changed against Iowa State. Shipley caught eight balls for 137 yards, the first time he’s gone over 100 yards all season. Actually, he had more yards Saturday then he did in the past four games combined.

Stock Down:
Anthony Fera: Fera transferred in from Penn State to solidify Texas’ kicking position after Justin Tucker graduated. And with two games remaining he hasn’t done much.
Fera missed the first four games of the season with a groin injury and hasn’t played much better since. He’s only 1-of-3 on the year and was benched after a missed field goal in the second quarter. He was replaced by Jordan, who went 2-of-2 in the game.

What’s Next:
Texas will get a bye week before it plays TCU on Thanksgiving. The week off should allow the players to get healthy and allow the coaches to add more wrinkles to the playbook.
TCU heads into the game at 6-4, and will also come off a bye. TCU features a stingy defense and a running quarterback in Trevone Boykin, who will challenge Texas’ run defense.