Big 12 Notebook: Kansas State vaults to No. 1 in Big 12 rankings 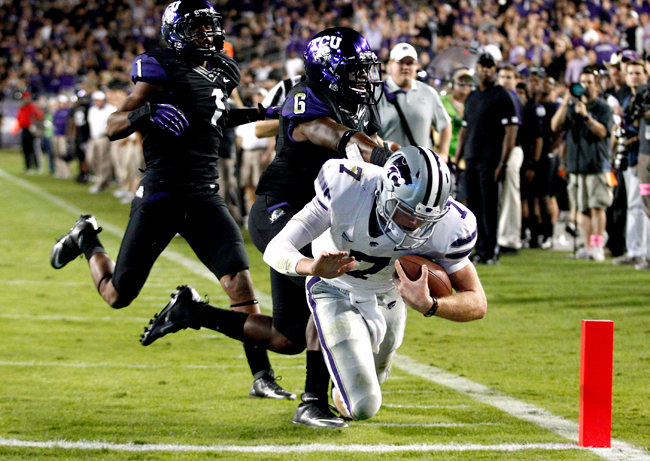 Kansas State, led by Collin Klein, defeated TCU 23-10 on Saturday, helping to vault the Wildcats to the No. 1 ranking in the BCS for the first time in school history.

For the first time in school history, Kansas State is the top-ranked team in the BCS standings. The Wildcats made the jump to the top after No. 15 Texas A&M upset No. 1 Alabama on Saturday. Oregon and Notre Dame now sit in second and third place, respectively.

Kansas State defeated TCU on Saturday to improve to 10-0 on the year, and wins in its last two games would likely earn the Wildcats their first ever national title game berth. Heisman hopeful quarterback Collin Klein put injury concerns to rest against the Horned Frogs, playing the entire game and scoring two more touchdowns on the ground to put his season total at 19.

This bodes well for the rest of the season for the Wildcats, who have a trip to Baylor and a home affair against Texas remaining on their schedule.

West Virginia (5-4) has been a major disappointment after starting the year with five wins, but this should not overshadow the contributions of the Mountaineers’ wide receivers. The dynamic duo of Stedman Bailey and Tavon Austin has put up eye-popping statistics all season long, and these two were a major reason why quarterback Geno Smith was the Heisman favorite through five games.

Bailey hauled in 75 passes for 1,055 yards and 16 scores through nine games, while Austin recorded 96 catches for 968 yards and 11 touchdowns. Both players rank in the Top 15 in all three major receiving categories, with Bailey leading the nation in touchdown catches.

Oklahoma State has been ravaged with injuries at the quarterback position, but this hasn’t stop the Cowboys from having one of the nation’s top offenses. In his first career start Saturday, junior Clint Chelf stepped in and sustained the potent OSU passing game by throwing for 292 yards and four touchdowns against West Virginia. Chelf filled in for starter Wes Lunt, who was out with concussion-like symptoms suffered last week against Kansas State. Sophomore J.W. Walsh also made three starts this season before suffering what is believed to be a season-ending knee injury Oct. 20.

The Big 12 has been one of the strongest conferences in college football from top to bottom in 2012 and as many as nine teams from the conference who could be bowl-eligible at the conclusion of the season. Kansas State, Oklahoma, Texas, Oklahoma State, Texas Tech and TCU have already clinched eligibility, and only Kansas has been eliminated. West Virginia and Iowa State are each one win away from qualifying for a bowl, while Baylor needs two wins in its final three games in order to gain eligibility.