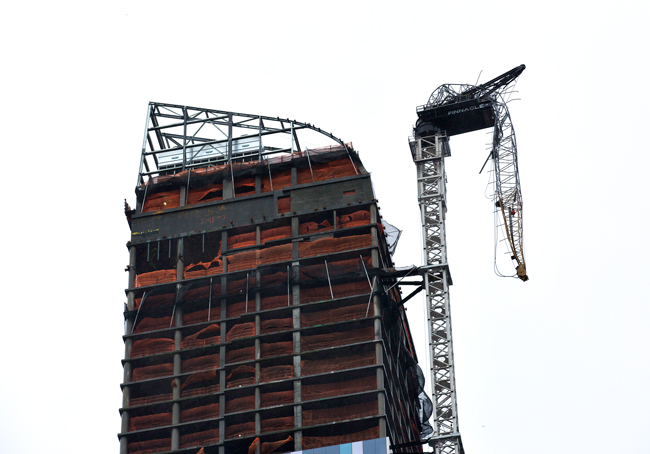 John Papanier, 12, directs traffic on a street congested by vehicles during cleanup after Superstorm Sandy, in the New Dorp section of Staten Island, N.Y. Residents of New York’s Staten Island borough are noticing something new as they and volunteers work to clear the remains of storm-damaged homes: gawkers. Cruising by in cars or walking through streets snapping photos, these are people drawn to the scene of a tragedy to glimpse what they've seen on television come to life.

Residents recognize the occupants right away. They’re disaster tourists, people drawn to the scene of a tragedy to glimpse the pictures they’ve seen on television come to life.

But the storm didn’t just bring darkness and despair; it also brought the gawkers.

Seaver Avenue on Staten Island was sloppy with mud, sand and curbside mounds of couches, personal photos, mattresses and sodden sheetrock. Mickey Merrell’s front porch was askew, and the storm surge nearly knocked a neighbor’s house into hers. Across the street a house was washed off its foundation. It was a scene of human misery — and one of New York City’s new attractions, like the construction crane that collapsed and dangled high above mid-town Manhattan on Oct. 29.

“Sometimes it’s like we’re at the zoo,” Merrell said. “So many people come and stop and stare at this place.”

Domenick and Kim Barone said they could tell the tourists apart from the volunteers because the gawkers’ clothes and shoes are clean, and they’re often snapping pictures.

Peter Lisi, a renter who is fighting a landlord trying to evict him from his damaged home, said he doesn’t mind the gawkers, “as long as they’re not making fun.” Some of them are drawn in to what’s happening and help, he said.