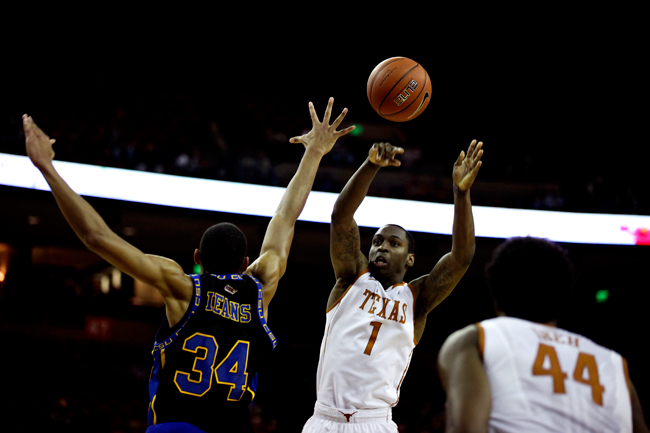 Texas shooting guard Sheldon McClellan paced the Longhorns with 25 points in the teams’ 23-point win against Copplin State. This is the second game in a row McClellan was the team leader in points scored, he scored 20 points in the team’s season opener. " />

Texas shooting guard Sheldon McClellan paced the Longhorns with 25 points in the teams’ 23-point win against Copplin State. This is the second game in a row McClellan was the team leader in points scored, he scored 20 points in the team’s season opener.

The Longhorns may not be in line to win any beauty pageants with their play, but after stuffing Coppin State 69-46 on Monday, the only statistic the team is concerned with is the two in the win column.

“We’ll clean it up,” sophomore guard Sheldon McClellan said. “We just have to be more patient offensively.”

With a combined 39 turnovers in its first two contests, Texas is still searching for consistency on offense. With Myck Kabongo and Jaylen Bond sidelined, freshman Javan Felix logged a team-high 33 minutes on his way to dishing out nine assists. Felix had his share of mistakes as he turned the ball over eight times and couldn’t connect on any of his three shot attempts.

Freshman center Cameron Ridley struggled holding onto the ball when it came his way and had six turnovers of his own. For the second time in as many games, McClellan carried the team on his back and led all scorers with 25 points on 7-of-10 shooting. McClellan was able to find space all game long, and unlike his first game, his shots began to fall.

“It’s like I’m a different guy this year,” McClellan said. “I’m not discouraged by my misses or anything like that, because I know Coach Barnes wants me to score for this team.”

After flirting with the idea of letting the Eagles hang around as the second half progressed, Texas eventually took control of the paint and, in turn, the game. The Longhorns held the Eagles to less than 25 percent shooting from the field and forced 17 turnovers.

“We kind of just settled after we got a lead,” McClellan said.

“Ibeh intimidated us a lot,” Ron Mitchell, Coppin State head coach, said. “We did have good looks at one point, but he changed that and altered a lot of shots.”

Longhorn freshmen scored 31 of the team’s 69 points while gaining experience in pressured situations. The Eagles were able to disrupt numerous passes in the Texas backcourt and even flashed a full court press at times.

For now Texas will take the win and hope it can get its two missing players back in the fold sooner rather than later. Barnes hinted at getting Bond back on the practice court either Wednesday or Thursday but was still unsure as to when Kabongo will return.

“When we get Myck and Jaylen back, we’ll definitely be a better team,” McClellan said. “Myck brings leadership, and Jaylen brings strength, energy and rebounding.”