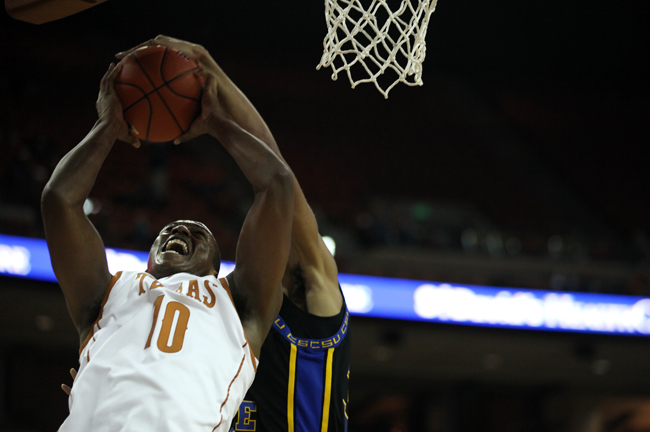 Texas' Jonathan Holmes attempts a shot in the first half of the game against Coppin State.

After leading the way in the Longhorns' season opener, Sheldon McClellan picked up right where he left off, scoring a game-high 13 points in the first half of Texas' game against Coppin State on Monday night.

The Longhorns lead the Eagles, 33-19 at halftime. It's a big improvement from their first game of the year last Friday, when they were tied with Fresno State, 25-25, after the first half.

Texas' defense was solid in the first half, holding Coppin State to 6-for-28 (21.4 percent) shooting and outrebounding the Eagles, 28-12.

For the second straight game, Texas is playing without point guard Myck Kabongo, who is still being investigated by the NCAA, and Jaylen Bond, who continues to nurse an ankle injury suffered in practice last week.