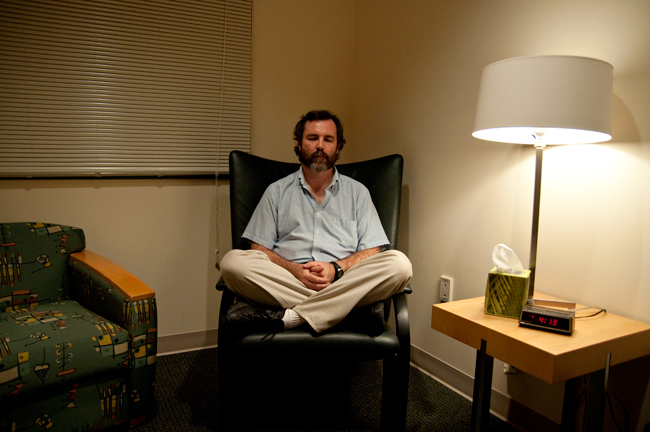 Dr. David Collins, Administrative Associate for the Clinical Psychology Program at UT, has been practicing meditation for 40 years.

There is a calming stillness that resonates throughout the third floor of the Sarah M. and Charles E. Seay Building. Aside from the occasional drumming of footsteps or the rare interruption of a ringing telephone, the halls and rooms are devoid of sound.

Such tranquility isn’t necessarily out of character for a psychology clinic, but the peacefulness can also be attributed to one of its staff members.

Dr. David Collins, administrative associate for the Department of Psychology, has two master’s degrees in religious studies and a doctorate in clinical psychology, but he considers his practice of meditation as his most meaningful achievement.

“Even with all the studies I’ve done in academia in religion and psychology, I’ve matter-of-factly learned so much more about human religiousness and the human psyche in meditation retreats than in any academic program,” Collins said.

Collins has practiced various traditions of meditation for 40 years and plans on completing his 40th meditation retreat before the year is over. He began practicing regularly at age 15 after reading an article on relaxation by Herbert Benson in a copy of Reader’s Digest.

“I found out that [Benson] had come up with that technique through studying transcendental meditation,” Collins said. “That’s when I began studying.”

Before stumbling upon the article in Reader’s Digest, Collins had several experiences to which he can attribute his interest in meditation.

“I came close to dying as a kid and got interested in what is most meaningful in life,” Collins said. “I woke up without thoughts and without remembering my name, but the fact that anything at all was happening, even though it was painful, was intrinsically beautiful.”

When Collins was seven, he nearly drowned while swimming in a neighborhood pool. He described the sensation of waking up and not knowing anything except that he was alive.

“The process of identifying with my thoughts and opinions was forcibly taken away from me, because I was oxygen-deprived,” Collins said. “An analogous procedure can be cultivated within meditation.”

It may seem odd for someone who has spent so much of his life in an academic atmosphere to also be a meditation guru, but Collins said modern psychology is heading in a direction that involves “a marriage between meditative experience and the scientific way of seeing things.”

Sucharit Katyal, president of the University Yoga Club and psychology graduate student, also has an interest in the partnership of meditation and science.

“I always had that curiosity of understanding the mind from all perspectives: the scientific perspective and the self-investigation perspective,” Katyal said.

Katyal has seen firsthand the psychological effects yoga and meditation can have on an individual. A close friend of his who suffers from bipolar disorder began practicing yoga with Katyal and noted mental health improvements.

“He still has bipolar disorder,” Katyal said. “But over the last year I’ve observed him, and he himself tells me how much it has brought his mind to a balance.”

Collins said meditation isn’t necessarily something that can replace prescribed medicine for all psychobiological conditions, nor is the conversation centered on an either/or approach. Instead, the two can benefit each other in their own respective ways.

For those interested in taking up the practice, Collins said that jumping in without a lot of preconceptions can be useful.

Lydia Crooks, Plan II and psychology senior, said her interest in meditation was reignited after hearing Collins speak in her positive psychology class.

“I really liked that he was laid-back in his presentation,” Crooks said. “He was thoughtful and inspiring even though he knows so much about the subject.”

Collins’ overall demeanor is, in fact, very laid-back and noticeably serene. He sits very still in his spot in the waiting room of the psychology clinic and speaks in hushed tones as he describes the ins and outs of the world of meditation. But he makes the point to keep one thing clear.

“On one hand, [meditation] is profound,” Collins said. “On the other hand, it’s really, really simple. It’s just about appreciating the bare fact that anything at all is happening.”

Printed on Tuesday, November 13, 2012 as: Doctor meditates on wellness