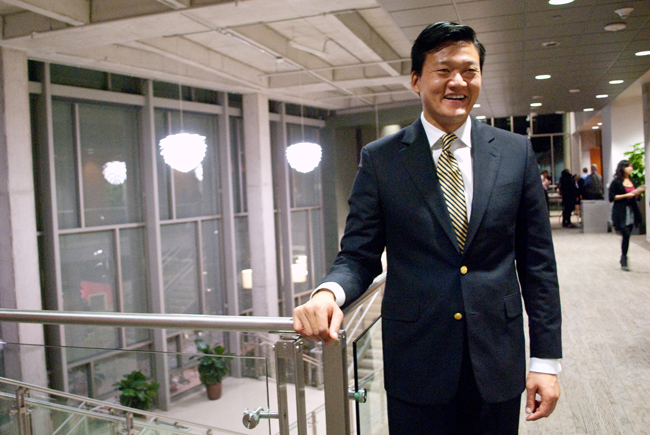 Lieutenant Dan Choi was discharged from the U.S. Army in 2009 after openly coming out about his homosexuality in 2009, a violation of the military’s “Don’t Ask, Don’t Tell” policy. Since then, Choi has become a vocal activist for gay rights.

In two years, Lt. Dan Choi went from serving as an infantry officer in the Iraq War to a vocal gay rights activist discharged from the military for being an openly gay man.

Choi shared his experiences coming out within the military and his family during an event titled “Out on the Front Lines” in the Student Activity Center Tuesday.

“Those three words, ‘I am gay,’ were the reason why I got kicked out of the military,” Choi said.

A West Point graduate, Choi served in the Army for more than 10 years, including a two-year stint in Iraq, but was discharged after coming out about his homosexuality on the Rachel Maddow Show in 2009. Choi was found to be in violation of the military’s “Don’t Ask, Don’t Tell” policy, which prohibited openly gay, lesbian or bisexual military personnel from serving in the military.

Choi, who said he has not spoken to his parents in three years, described the resistance he faced from his family while coming out prior to coming out to the military.

“My dad would say that gay people are not only the number one sinners in the world but they are all going to go to hell, that they all wear high heels, and that they all have AIDS,” Choi said.

After his discharge, Choi became a vocal critic of DADT policy. In December 2010, Congress passed and President Barack Obama signed a bill to repeal the policy. Choi continues to advocate for gay rights and said there is much more work to be done to achieve full equality for the LGBT community.

Stephanie Kim, public relations senior and chair of the Asian American Culture Committee, which co-sponsored the event, said Choi’s personal story should serve as an example of how people can overcome barriers to affect change on issues they care deeply about.

“I hope students will be inspired and be able to see no matter what background they come from, no matter what their skin color is, no matter what religious beliefs they behold, each and every one of them hold the power and capability to make a difference,” Kim said.

During a question and answer period, Choi said students should take advantage of the role they can play in the current gay rights movement.

“50 years from now your grandchildren will ask you ‘Grandma, grandpa what did you do during the time you all were fighting for my rights?’” Choi said. “I hope that you can say ‘I stood up and I shared with the world: this is who I am, this is what I stand for.’”