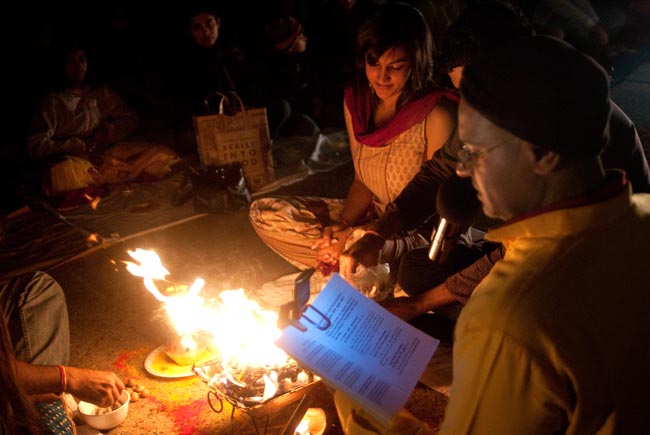 Students and volunteers particpate in Diwali, the festival of lights, at the Main Mall on Tuesday night. The festival consists of many traditions and is held every year.

Students celebrated Diwali, a Hindu cultural and religious tradition, with prayer, music and candles at a festival on the Main Mall Tuesday sponsored by the Hindu Students Association.

Deepa Pokala, math and pre-med junior and Diwali co-chair, said Diwali is associated with Hindu mythology of Lord Rama, a reincarnation of a Hindu god. Pokala said the celebration is in honor of Lord Rama returning home after defeating a demon, Ravana, that captures his wife and is a symbol of good defeating evil. The Hindu Students Association is an organization open to all students that holds weekly discussions centered on Hindu culture and celebrates Hindu traditions, including Diwali, on campus.

The celebration is also referred to as row of lights, the festival of lights and Hindu New Year. Because of the focus on light, the festival included candle-making and fireworks, as well as traditional Indian pastries and dances.

“During this time families will go and visit each other,” Pokala said. “Some people focus on food. Some people really stress lighting up their homes with giyas which are candles.”

Students participated in a havan, a prayer surrounding a fire as a symbol of light and a spiritual connection to the gods, while Hindu hymns called bhajans were played.

Students could also participate in other Diwali traditions including rangoli, or colored flour made into designs and symbols, normally placed outside homes on the ground to publicly show the family is celebrating Diwali. Abhijit Sreerama, association member and math and pre-med junior offered kumkum, powder placed on the forehead as to center the mind for prayer.

“It has a cultural meaning as well as a spiritual meaning,” Sreerama said. “The forehead is the center of thought, and this is put on both men and women during this time, and when you pray, it centers your being.

Public health junior Navya Singirikonda helped students make toran, which is a cultural ornament that is placed across the top of a door with sheer cloth, fruits and leaves.

“There’s a lot of significance to the entrance of the home,” Singirikonda said. “It’s always decorated with fruits and leaves. The decoration welcomes anyone that’s coming to the house and usually in India, the doors are always open. [The toran] is always on there, but you decorate it more for festivals like Diwali and replace the leaves.”

Printed on Wednesday, November 14, 2012 as: Diwali lights up sky to celebrate tradition