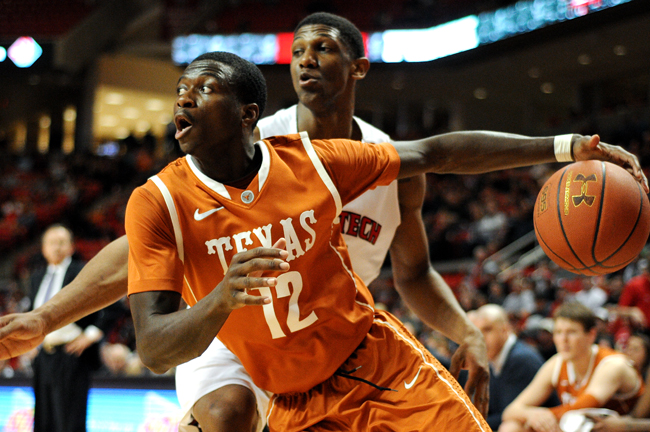 Myck Kabongo was sorely missed during the Texas’ win over Coppin State on Monday. The Longhorns’ youth was apparent and they accumulated 26 turnovers.

Twenty-six turnovers later, and Myck Kabongo is needed more than ever in the Texas lineup.

The Longhorns secured a 23-point victory over Coppin State Monday, but it was the sloppiest offensive performance by the team in recent history. Actually, the 26 turnovers Texas committed are the most in a single game during Rick Barnes’ 14-year tenure.

“You don’t throw it to a guy who’s not open,” Barnes said. “There’s so much that goes into this offense. Guys throw bad passes because they’re tired, they stand straight up, they don’t get down.”

It was a lax effort, and the Eagles were opportunistic in their pressure of the young Texas guards. They jumped in passing lanes, trapped frequently and took advantage of lazy passes. Freshman point guard Javan Felix turned the ball over eight times and looked every bit the freshman he is.

Felix and the rest of the young Texas ball handlers will eventually mature and adapt to the pace of the college game and Barnes’ system. However, nothing would solve the Longhorns’ turnover issue quicker than the return of Kabongo, who remains ineligible as the NCAA continues to investigate possible improper benefits he received in the offseason.

Kabongo, the team’s starting point guard last season, is expected to take huge strides in his sophomore campaign. He went through growing pains last year, but showed flashes of brilliance with his lightning-quick first step and pass-first personality. As a freshman, Kabongo averaged 9.6 points, 5.2 assists and three rebounds a game. Not staggering numbers by any means, but a solid contribution from a player Barnes leaned heavily on to provide leadership and solid, unselfish play.

He had a 1.73-to-1 assist-to-turnover ratio last year, numbers that are significantly better than Felix’s .9-to-1 ratio through two games. Kabongo is just more adept at taking care of the basketball.

But Kabongo provides much more than a steady presence at the point. He’s the explosive threat on the offense end the Longhorns need to solidify their attack —  ­or at least make it passable. Texas has shot 42 percent from the floor this season, and has only made 24 percent of its three-point attempts.

Printed on Wednesday, November 14, 2012 as: Freshmen struggle with turnovers