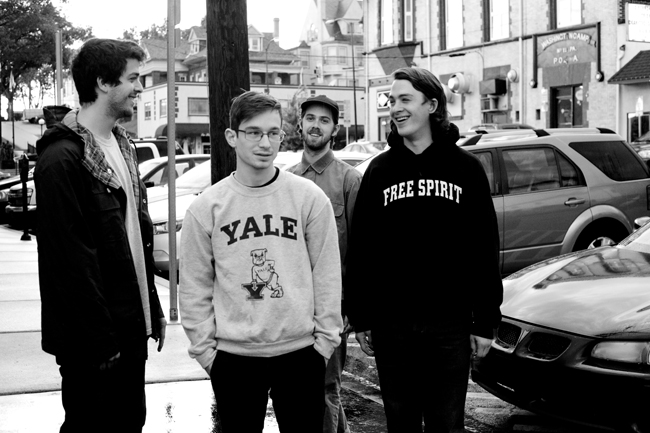 Alternative punk band Title Fight will come to Austin this Wednesday to promote their new album Floral Green. The band has found a way to attract both mainstream and underground fans to their brand of punk. Photo courtesy of Manny Mares.

Pennsylvanian band Title Fight will bring their alternative punk sound to Red 7 Wednesday. The band is currently on tour with Pianos Become the Teeth and Single Mothers to promote their third album, Floral Green. Title Fight’s latest release exemplifies a common struggle that many hardcore bands face: evolve out of the genre or stay the same? If a punk band changes, they can risk being labeled as “sell-outs,” alienating the fan base. In the punk world, there can be a stigmatizing association of musical evolution with appealing to the masses.

Floral Green sees Title Fight abrasively chisel their way between the two. Having begun playing unabashed pop-punk, their sound has steadily changed since their first album, The Last Thing You Forget in 2009. Their transition, while certainly retaining punk influences, is notably marked by an almost complete drop of their poppier aspects in favor of grungy alternative rock. Proving to be true ’90s kids, they cite bands like Nirvana and Sonic Youth as inspirations for their recent sound, and drummer Ben Russin couldn’t be happier.

“We’ve had a good reception, but we didn’t know what to expect. It wasn’t a departure but a progression from previous material,” Ben Russin said, “Sales-wise it’s been better, not that it mattered, and we charted on Billboard, which is very surreal.”

The founding three members have been friends since childhood, forming the band in 2003 when they were only in sixth grade. Ben is the brother of bassist Ned Russin, who also shares vocal responsibilities with guitarist Jamie Rhoden. They added guitarist Shane Moran in 2005 and have stayed intact ever since.

“We see all these other bands that constantly change members and replace people, but we’ve always loved just being friends,” Ben Russin said. “I think being friends is just more important.”

Nine years after humbly beginning with Blink-182 covers, Title Fight now frequently opens for big acts like Rise Against, A Day To Remember and New Found Glory. They joined the 2012 Vans Warped Tour, playing for thousands of people at a time in huge arenas, a far cry from the small town crowds they were used to.

“This past year we were doing really big support tours that put us out of our comfort zone,” Russin said. “Intimacy and connection with the fans is much more important.”

Title Fight is known for their dedicated fan base. If there was a Guinness Book World Record for stage dives during a show, they would probably set it, or at least be an honorable mention. An impressive mass of bodies often piles up in front of the stage from fans aspiring to grab the microphone to recite Title Fight’s lyrics.

“I don’t even really know why I play music anymore. At this point its just that we’ve been listening and playing all our lives,” Ben Russin said, “It’s so gratifying ­— if anybody comes to see your music it’s just really cool.”