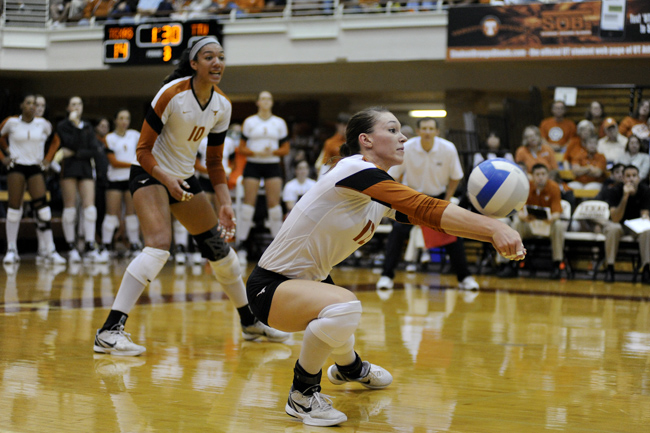 Why Texas Won:
The Longhorns were able to clinch the Big 12 title in dominating fashion. They swept the Raiders with consistent and dynamic play from their best players. Outside hitters Bailey Webster and Haley Eckerman both had big nights. Eckerman finished with 19 kills and a hitting clip of .486 while Webster finished with six blocks, 14 kills and a .650 hitting clip.

Set-by-set:
Set 1: Texas Tech did not put up much of a fight during the first set. The Longhorns jumped to a quick 11-4 lead, which quickly expanded to 21-12. Before anyone knew it, the Longhorns had claimed the first set with a score of 25-16. Eckerman had eight kills in set one while setter Hannah Allison had two kills, a block and 13 assists.
Set 2: The Red Raiders were able to keep the score close until ultimately dropping the set to the Longhorns, 25-20, to give Texas a 2-0 advantage. The lead changed hands several times during the set until the Longhorns went up 15-13 and proceeded to expand their lead throughout the set. Allison was on fire with 16 assists and Webster had three blocks.
Set 3: With one set between them and the Big 12 title, the Longhorns never trailed in the third set. The Longhorns had a 13-12 lead before a 10-3 run brought them within two points of victory. Webster got the final kill to put the third set away, 25-17, and complete the sweep. Khat Bell had four kills and three blocks in the final set while Webster had five kills and two blocks.

Stock Up:
Webster and Eckerman: The duo of Webster and Eckerman has been consistently on the rise since the start of the season. After several weeks of inconsistent play, their performances locked together at the beginning of October and their consistently above-average stats have provided the Longhorns with an undefeatable weapon so far. The health and performance of these two outside hitters will be a significant advantage as the Longhorns head into the postseason at the end of November.

Up Next:
The Longhorns only have two games left in Big 12 play. On Saturday, the Longhorns will face West Virginia in their last regular season home game at 1 p.m. at Gregory Gym. The game should be an easy one for the Longhorns as the Mountaineers are winless in the Big 12 this season (0-13). They are unranked and 8-19 on the season. The match will also be the last home game for Sha’Dare McNeal, the only senior on the Texas roster.