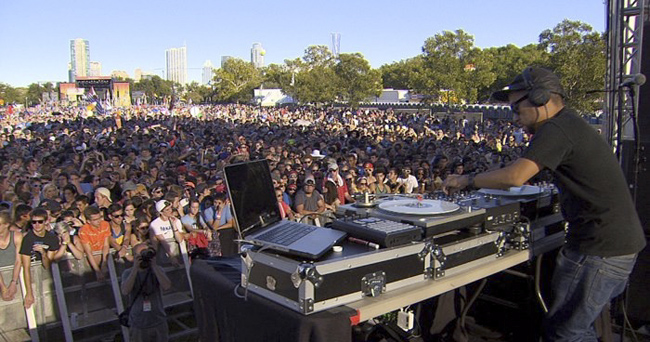 Disc jockey Mel Cavaricci has been a part of the Austin party scene for over 15 years. Most recently he DJ’ed for President Obama’s election party in Chicago (Photo Courtesy of Mel Cavaricci).

Austin-based disc jockey Mel Cavaricci, known as DJ Mel, has been a part of the city’s party scene for more than 15 years. He’s done just about everything: performing at the Austin City Limits Music Festival, CounterPoint and Lollapalooza music festivals; befriending DJ maestro A-Trak; and, most recently, DJing for President Obama’s election party in Chicago, Ill.

He’s surprisingly nonchalant about it all, grateful for the opportunities he’s been given but not expecting any newfound fame because of his most recent accomplishment.

DJ Mel spoke with The Daily Texan about DJing President Obama’s election party, replacing The Weeknd at this year’s ACL and future performances.

The Daily Texan: You recently DJed at President Obama’s election party in Chicago, Ill. How did that gig come about, and when did you find out you landed it?

DJ Mel: I’ve DJed a couple of political events in the past. I did the California Democratic Convention last year, and I did the Democratic National Convention in September of this year. On the strength of those two events, a friend of mine that works for the Obama camp suggested I DJ at President Obama’s election party.

I did not know I had landed the gig until two, three days before the event. They called and asked me if I wanted to DJ, and I said, “Uh, yeah.” (laughs)

DT: What was the initial feeling you had when you picked up your press credentials and prepared for the night?

DT: Were you nervous when you began DJing?

Mel: At first I was, because during the event they had told me to just play it by ear and be mindful of what I play. It was nothing like playing at the club, you know? I can play whatever I want and not have to worry about the lyrical content or it being clean or dirty. (laughs) It was a completely different setting there. In a way, I was not really playing for the crowd; I was playing for the president. So anything that I played was, like, a reflection on him.

DT: How did choosing “Twist and Shout” as the celebratory song of choice come about?

Mel: I had just lost my mind when they announced that President Obama won. I was so happy. I was jumping up and down, and so was everybody else. So spontaneously I just decided to go into “Twist and Shout” by the Beatles, and it worked. The sound people were giving me the thumbs-up, letting me know that the producers of the event liked that I chose that song.

That entire moment reminded me of “Ferris Bueller” because the movie takes place in Chicago and “Twist and Shout” is such an essential part to the movie. The crowd in the movie was just as diverse as the crowd at the election party, and it reflected what was going on when Obama was announced as president.

DT: Prior to your election party gig, you took over The Weeknd’s spot at this year’s Austin City Limits Music Festival. How did that gig come about?

Mel: Early Sunday morning, the day The Weeknd is scheduled to perform, I get a call from one of the producers for ACL, and he tells me, “Hey, The Weeknd just canceled their ACL gig. Would you like to take over their spot?” I said yes, still half asleep, and only realized what I had gotten myself into when I woke up a couple hours later.

Looking at the crowd, I just played a lot of trap rap and dance music, and it worked. Four or five songs in, and the crowd was into it. I was really happy it worked out.