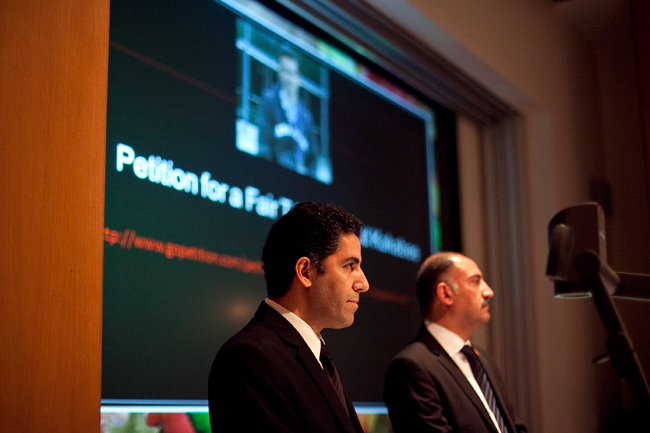 As the health of a former UT doctorate student jailed in Iran since February 2011 deteriorates, an international day of protest is being planned in his honor.

Dr. Arash Alaei and Dr. Kamiar Alaei, two Iranian HIV/AIDS researchers who were recently released from the same prison where Omid Kokabee has been in jail for almost two years on a 10-year sentence, spoke on campus Wednesday night. The brothers said the best way to advocate for Kokabee is to put international pressure on the Iranian government, as it has responded to pressure in the past. They said they are working with representatives of Amnesty International, a human rights advocacy organization, to plan the protest demanding justice for Kokabee and others treated unjustly by the Iranian government.

The Alaeis said they were jailed and sentenced to prison terms in Iran in 2008 for their work regarding HIV/AIDS research, a controversial topic in Iran.

Following international pressure from more than a dozen academic organizations, both were released within three years, before their sentences expired.

Kamiar Alaei said Kokabee’s condition has recently been deteriorating, as he does not have adequate access to medical care in the Iranian prison. He said Kokabee recently received a diagnosis of kidney stones by a prison doctor and was told he needed inpatient care, but the Iranian government has prevented Kokabee from getting it.

The brothers spoke at an event titled “From UT to Evin Prison: Case of Omid Kokabee Discussed,” hosted by the Committee on International Freedom of Scientists of the American Physical Society, the American Association for the Advancement of Science, APS Physics and Amnesty International. It focused on the political situation in Iran and Kokabee’s current plight.

Kamiar Alaei said he wants Kokabee to become “a voice of the voiceless and a face of the faceless.”

The brothers said people in Iran are often treated unjustly because the government does not agree with their work. They said groups targeted include politically active women, attorneys and students. They did not know what was controversial about Kokabee’s work and said the arrests can often seem arbitrary.

“They encourage some doctorate students to go abroad, and the next day they arrest some of them,” Kamiar Alaei said.

Kokabee was arrested in Iran in February 2011 while he was visiting family. He was charged with conspiring with foreign countries in plots against the Iranian government and sentenced to 10 years in prison.

Following his original arrest, protests broke out around the world, but the Iranian government has not reduced or dismissed Kokabee’s charges.

Kokabee lost his final appeal of the charges in August and recently received an additional 90-day sentence for teaching other prisoners English, French, Spanish and physics, his attorney, Saeed Khalili, said.

Kokabee was convicted of the original charges in a rapid trial with more than 10 other individuals, according to a petition created by UT physics professor Herbert Berk asking the Iranian government to give Kokabee a fair trial. The petition also said he did not have access to a lawyer and was given little to no time to defend himself in court.

Berk’s petition has received 518 signatures so far, and he plans to submit it to the Iranian government in roughly two weeks.

To access the petition asking the Iranina government to give Omid Kokabee a fair retrial go to: http://www.gopetition.com/petitions/fair-retrial-for-omid-kokabee/signatures.html