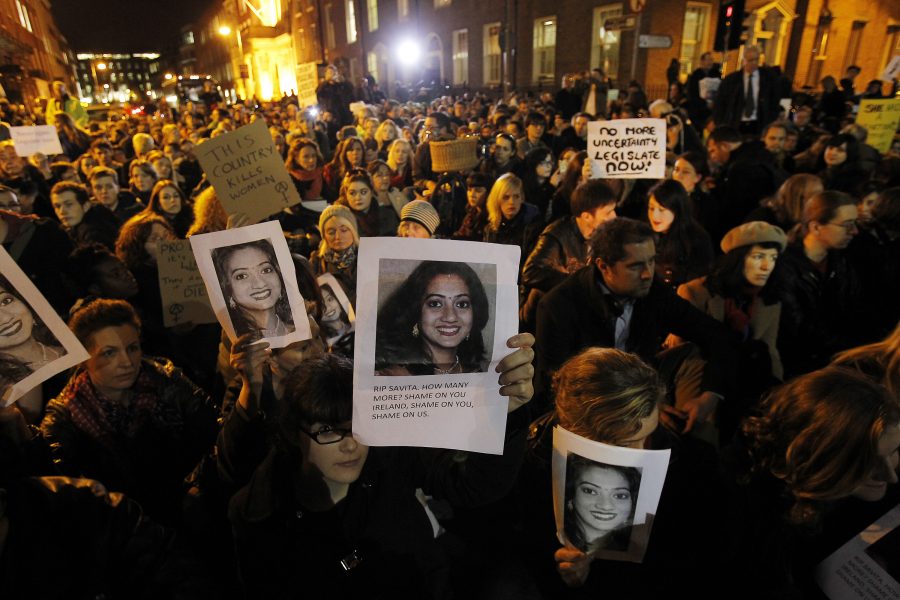 DUBLIN — The debate over legalizing abortion in Ireland flared Wednesday after the government confirmed that a woman in the midst of a miscarriage was refused an abortion and died in an Irish hospital after suffering from blood poisoning.

Prime Minister Enda Kenny said he was awaiting findings from three investigations into the death of Savita Halappanavar, a 31-year-old Indian woman who was 17 weeks pregnant. Her case highlighted the legal limbo in which pregnant women facing severe health problems can find themselves in predominantly Catholic Ireland.

Ireland’s constitution officially bans abortion, but a 1992 Supreme Court ruling found the procedure should be legalized for situations when the woman’s life is at risk from continuing the pregnancy. Five governments since have refused to pass a law resolving the confusion, leaving Irish hospitals reluctant to terminate pregnancies except in the most obviously life-threatening circumstances.

Halappanavar’s husband, Praveen, said doctors at University Hospital Galway in western Ireland determined she was miscarrying within hours of her hospitalization for severe pain on Sunday, Oct. 21. He said over the next three days, doctors refused their requests for an abortion to combat her surging pain and fading health.

The hospital declined to say whether doctors believed Halappanavar’s blood poisoning could have been reversed had she received an abortion rather than waiting for the fetus to die on its own. In a statement, it described its own investigation into the death, and a parallel probe by the government’s Health Service Executive, as “standard practice” whenever a pregnant woman dies in a hospital.

Opposition politicians appealed Wednesday for Kenny’s government to introduce legislation immediately to make the 1992 Supreme Court judgment part of statutory law. Barring any such bill, the only legislation defining the illegality of abortion in Ireland dates to 1861, when the entire island was part of the United Kingdom. That British law, still valid here due to Irish inaction on the matter, states it is a crime punishable by life imprisonment to “procure a miscarriage.”

In the 1992 case, a 14-year-old girl identified in court only as “X’’ successfully sued the government for the right to have an abortion in England. She had been raped by a neighbor. When her parents reported the crime to police, the attorney general ordered her not to travel abroad for an abortion, arguing this would violate Ireland’s constitution.

The Supreme Court ruled she should be permitted an abortion in Ireland, never mind England, because she was making credible threats to commit suicide if refused one. During the case, the girl reportedly suffered a miscarriage.

Since then, Irish governments twice have sought public approval to legalize abortion in life-threatening circumstances — but excluding a suicide threat as acceptable grounds. Both times voters rejected the
proposed amendments.

An abortions right group, Choice Ireland, said Halappanavar might not have died had any previous government legislated in line with the X judgment. Earlier this year, the government rejected an opposition bill to do this.