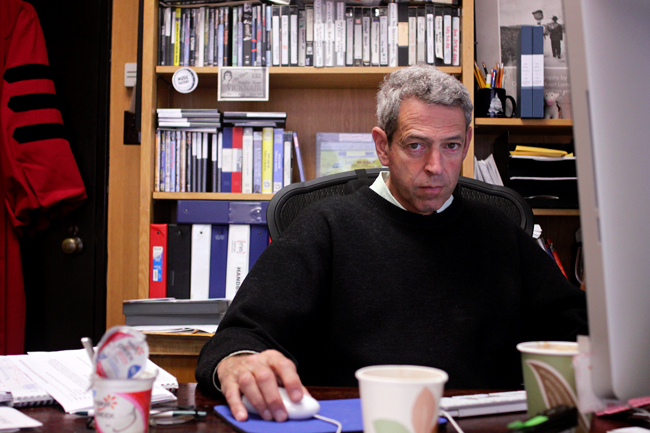 Radio-television-film department chair Paul Stekler helped create a video on teachers and students at Chiutika, a school in Mfuwe, Zambia, following contact from SCALEAfrica, a New York-based nonprofit that designs and builds schools in rural Africa.

Professors and an alumna from the radio-television-film department teamed up with a nonprofit to help create a short film that showcases a remodeled and expanded school in Mfuwe, Zambia.

Erinn McGurn and Guy Baron, co-founders of SCALEAfrica, a New York-based nonprofit that designs and constructs schools in rural sub-Saharan Africa, contacted radio-television-film department chair Paul Stekler to help create a video about teachers and students at Chiutika, the school SCALEAfrica built in Mfuwe. Stekler suggested radio-television-film lecturer Miguel Alvarez to produce the film and UT alumna Iskra Valtcheva to work as the cinematographer. The film, “Building Futures,” focused on the lives of two sisters in the ninth grade who attended the rebuilt school.

Stekler said after he suggested that Alvarez and Valtcheva produce the film, he decided to pay his way to Zambia to help make the short film.

“I gotta tell you that the eight days of production there were probably the eight most fun days of production I have ever done in my entire life,” Stekler said. “The people were wonderful, the students were great and it was an interesting place to film and look around.”

Alvarez said he didn’t want to make a traditional nonprofit organizational video. Instead he decided the best approach was to do a portrait piece on a couple of students in the school.

“This approach would allow us to introduce viewers not only to the kids that were the beneficiaries of the fundraising but the village as well,” Alvarez said. “In this way, we wanted to put a face to the fundraising.”

The video followed the girls to and from school, and it includes an interview from their father, who supports his daughters in their pursuit for an education. The video emphasized the importance for girls to obtain an education in Zambia, a country with a 35 percent female drop-out rate in primary education, according to UNICEF.

Alvarez said despite not having adequate school facilities in Mfuwe, the students were eager to learn. He said he observed a general sense of gratitude about having the chance to go to school.

“I believe we succeeded in our goal of making a short film that introduced the world to the students and village of Mfuwe,” Alvarez said. “I’m proud of it.”

Radio-television-film sophomore Bronwyn Walls said she liked the amount of screen time the sisters were given because it helped her connect to the film.

“After watching the sisters go about their daily life, I was better able to understand the way SCALEAfrica helped their school and community,” Walls said.