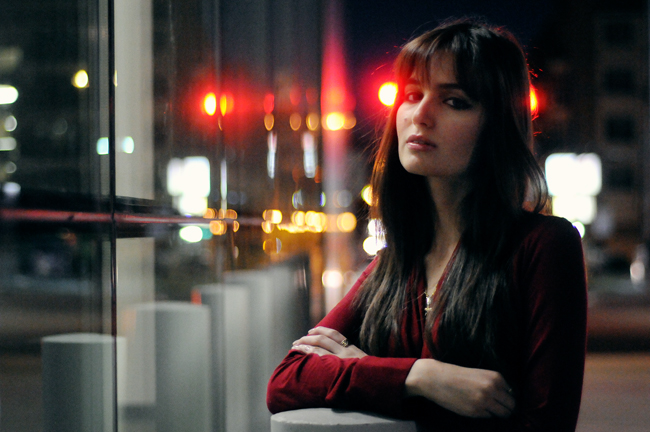 Undeclared sophomore Rocio Tueme will be one of 45 grid girls in the Circuit of the Americas Forumula 1 U.S. Grand Prix on Sunday.

UT students are shaping the face of Formula 1 racing in the United States as they add Texas flair to the international race Sunday.

Undeclared sophomore Rocio Tueme will represent Austin as one of 45 grid girls at the Circuit of the Americas Formula 1 U.S. Grand Prix on Sunday wearing an outfit designed by another UT student. Tueme heard about the opportunity from a friend and was chosen as a grid girl after a phone interview with the designer.

Grid girls serve as promotional models, and on the day of the race they hold flags representing the participating countries before the start of the race and interact with the racers and their teams down on the track.

Tueme said the style of the outfit she will be wearing represents the culture of the race’s location more than the traditional Formula 1 grid girl uniform.

“When you think about a grid girl outfit you think something really tight, and really short, and really revealing. This one is actually really inspired by Austin, it’s kind of like a cowgirl,” Tueme said.

Tueme has lived in Texas for 10 years and is originally from Mexico. Tueme said she does not diligently follow Formula 1 racing but watched a few races growing up because it is a popular sport in Mexico.

“Now I’m excited for this because I have watched the racers, and I have my favorite ones, so I’m excited to see them in person,” Tueme said.

Ross Bennett, a local designer and textiles and apparel senior, designed the outfits.

“I designed this very hunting-inspired meets Dallas Cowboy cheerleader — so it’s like white-fringed skirts, a hunting jacket that has western yolks on it and a vest that matches it, too. Red cowboy boots, red lace underneath big turquoise jewelry from Kendra Scott, and that is how this whole All-American-big-Texas girl came to formation,” Bennett said.

In the search for the grid girls, Bennett said he wanted to showcase women with bodies representative of the diversity in America.

“I could have pulled all Texas blondes and shown them Texas, but I wanted to show America, so we have girls of all nationalities in the group,” Bennett said.

He said there is a high level of professionalism expected of the girls because an estimated 600 million viewers around the world will watch the race. Bennett said they looked for experienced girls, like Tueme, who are educated and speak multiple languages because they will interact with foreign dignitaries, ambassadors and celebrities.

“It’s very easy to find pretty girls, especially in Texas, but it’s hard to find girls that can actually talk and carry on a conversation,” Bennett said.

Dressed in the grid girl uniform, Tueme attended an event Monday that track owner Bobby Epstein and Mack Brown attended. She will attend the Aerosmith concert Friday night. Bennett said the girls’ contracts end Nov. 30, but the uniforms will be worn at private events, VIP parties and other events until next year’s race.

Printed on Friday, November 16, 2012 as: F1 employs students as models