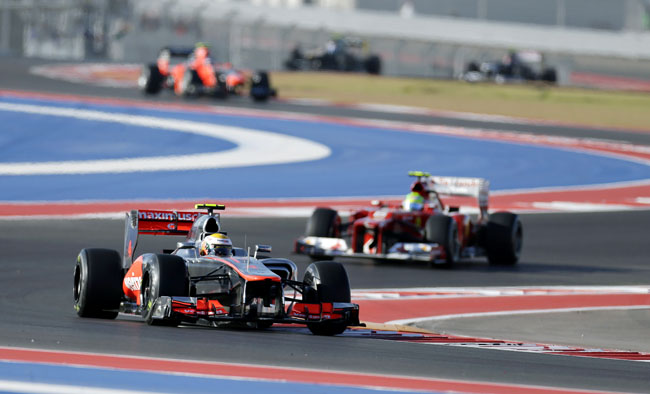 McLaren Mercedes driver Lewis Hamilton of Britain steers his car during the third free practice session for the Formula One U.S. Grand Prix auto race at the Circuit of the Americas Saturday, Nov. 17, 2012, in Austin, Texas.

Austin got its first taste of the ups and downs of Formula 1 racing this weekend, as roughly 300,000 people traveled here from all over the world to take part in the festivities surrounding the internationally-watched sport.

From Friday to Sunday people gathered at the newly built, $400-million-dollar racetrack, or circuit, in Southeast Austin to watch drivers in specially designed cars race at speeds of up to 220 miles per hour. Austin is now one of 20 cities worldwide that hosts Formula 1 racing.

Along with the race, local businesses held F1-themed festivities throughout the weekend.

Some businesses, however, reported not seeing the proceeds they were expecting this weekend.

Lauren Culver, a bartender at Darwin’s Pub located at East Sixth Street and San Jacinto Boulevard, said many businesses on East Sixth expected a larger crowd than they got.

“It wasn’t what everybody was hyping it up to be,” Culver said. “I think it was people being down at Fan Fest. They just didn’t make it down to this part of the street. They were mostly on Third, Fourth and Fifth Street.”

Culver said business ended up being about average at Darwin’s Pub throughout the weekend, but she did notice a marked change in the crowd.

Putnam said the event brought in travelers from all over the world, more so from Mexico and Canada than anywhere else based on ticket sales.

The Austin-Bergstrom International Airport even recently added a fourth security checkpoint to help accommodate the large influx of travelers.

Along with airport traffic, Putnam said city agencies and Circuit of the Americas worked to plan for increased vehicular traffic related to the event. She said city efforts to reduce traffic proved to be successful, and the traffic issues were less than what was expected.

Capital Metro extended services throughout the weekend and provided a downtown loop route free of charge. Erica Macioge, a Capital Metro spokesperson, said the total number of riders won’t be known for a few weeks, but overall their operations went smoothly. She said their efforts contributed to the weekend’s smoother-than-expected traffic conditions.

Putnam said roughly 49,000 race attendees took advantage of a shuttle service from Austin to the track Circuit of the Americas provided for them free of charge.

Jonathan Insley, co-owner of Old School Bar & Grill, said the speculation around the event seemed to give many an unclear picture of what to expect.

“It was the unknown this year,” Insley said.

He said one issue with the hype surrounding F1 was the idea that traffic was going to be a bigger problem than it was, as it seemed to cause locals to stay home and not venture out into downtown.

Putnam said officials will now have a better idea of what to expect with F1, and she expects to see the event grow and better establish itself as a part of Austin’s culture.

She said the F1 circuit will now be used to host a variety of events throughout the year including concerts and other F1-related activities. She said private companies have also begun to lease the complex, and it was recently reserved for the Del Valle High School prom.

Putnam said most of her co-workers are UT alumni, and F1 created 70 full-time positions and thousands of seasonal jobs. According to Circuit of the Americas, the events hosted at the circuit are expected to have a total annual economic impact of between $400 million and $500 million.