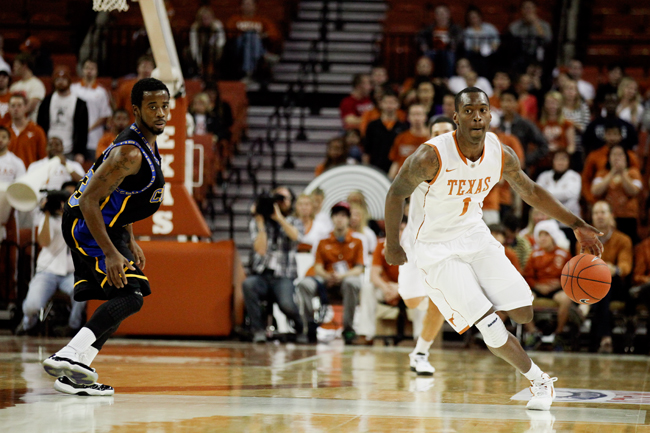 Not much has changed for Texas since its season began.

The Longhorns are still without Myck Kabongo, the sophomore point guard who is still under investigation by the NCAA. They still do not know if sophomore forward Jaylen Bond, who has not practiced since suffering an ankle injury Nov. 6, will play.

“Not playing weighs on him,” head coach Rick Barnes said of Kabongo, who allegedly received impermissible benefits from an agent over the offseason. “He’s done everything he can in practice to continue to help these guys. In the last two and a half weeks we’ve kind of had to remake ourselves without him. We’re just going to have to find a way to get it done.”

Both Kabongo and Bond traveled with the team to Hawaii, where Texas begins play in the Maui Invitational on Monday against Chaminade. It will mark the Longhorns’ fourth Maui Invitational appearance and first since 2008, when they took third place. They beat Chaminade, 84-62, in 2004 during their only previous meeting.

With two key players out — leaving Texas with only three scholarship players with college basketball experience before this year — sophomore guard Sheldon McClellan has carried the Longhorns to a pair of wins.

He scored 20 points in a 55-53 win against Fresno State, a team that won 14 games last year, going 14-for-14 from the free throw line. That was the most tries from the charity stripe without a miss in a game in UT’s history.

McClellan found his shot in Texas’ second game — a 69-46 victory — shooting 7-for-10 from the floor and hitting three of four three-point attempts on his way to scoring a career-high 25 points.

Does he have to be the team’s leading scorer for Texas to succeed without Kabongo and Bond?

“If it comes down to that,” McClellan said. “It’s not something I worry about. I’m going to have to score but it’s not really on my mind.”

Texas plays either USC or Illinois on Tuesday if it beats Chaminade Monday.