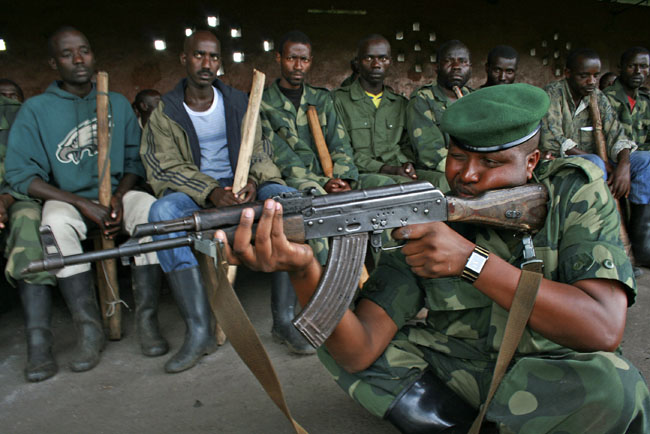 GOMA, Congo — A rebel group believed to be backed by Rwanda advanced to within two miles (three kilometers) of Goma, a crucial provincial capital in eastern Congo, marking the first time that rebels have come this close since 2008.

Congolese army spokesman Col. Olivier Hamuli said the fighting has been going on since 6 a.m. Sunday and the front line has moved to just a few miles (kilometers) outside the city. After more than nine hours of violent clashes, the two sides took a break just after 3 p.m., with M23 rebels establishing a checkpoint just 100 meters (yards) away from one held by the military in the village of Munigi, exactly 1.8 miles (three kilometers) outside the Goma city line.

M23 spokesman Col. Vianney Kazarama initially said the rebels would spend the night in Goma. In the afternoon after the fighting stopped, he said, “We can take Goma easily now, we have pushed the Congolese army back over 10 kilometers (six miles) in one day.”

“We are confident that we can take Goma and then our next step will be to take Bukavu,” he said, referring to the capital of the next province to the south.

The M23 rebel group is made up of soldiers from a now-defunct rebel army, the National Congress for the Defense of the People, or CNDP, a group made-up primarily of fighters from the Tutsi ethnic group, the ethnicity that was targeted in Rwanda’s 1994 genocide. In 2008, the CNDP led by Rwandan commando Gen. Laurent Nkunda marched his soldiers to the doorstep of Goma, abruptly stopping just before taking the city.

In the negotiations that followed and which culminated in a March 23, 2009, peace deal, the CNDP agreed to disband and their fighters joined the national army of Congo. They did not pick up their arms again until this spring, when hundreds of ex-CNDP fighters defected from the army in April, claiming that the Congolese government had failed to uphold their end of the 2009 agreement.

The latest clashes broke out Thursday and led to the deaths of at least 151 rebels and two soldiers. On Saturday U.N. attack helicopters targeted M23 positions in eastern Congo.