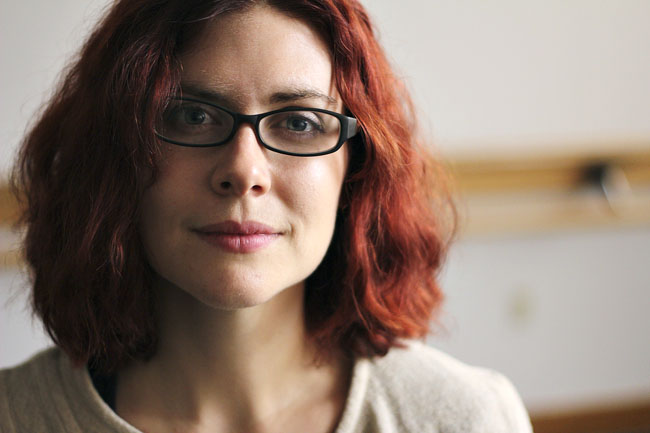 Sarah Saltwick’s adaption of Nathaniel Hawthorne’s “The Scarlet Letter” will be performed at the B. Iden Payne Theater beginning next week.

Sarah Saltwick may be the next Nathaniel Hawthorne.

With careful prose, redeemable characters and lines filled with heartbreak and raw emotion, Saltwick’s adaption of “The Scarlet Letter” embodies the difficulty of Hawthorne’s 1850 American classic, regardless of how much of the story she changed.

Saltwick, a third year playwriting and fiction MFA candidate at the Michener Center for Writers, was an actress before she was a writer. Saltwick began performing in preschool and acted in many roles as mothers, aunts and maids. In her experience, actresses had two options: to play the mother or to play the love interest.

When the University of Texas’ Department of Theatre & Dance approached Saltwick and Steven Wilson, MFA directing candidate, about creating a play to serve the large population of undergraduate actresses, the two decided to rework “The Scarlet Letter.”

“It wasn’t all about shame and sadness,” Saltwick said. “What I refused to do was have 10 mopey girls in black dresses speaking about sin in impossible-to-understand accents.”

Instead, Saltwick wanted to bring Hester Prynne, a woman condemmed by her Puritan neighbors for refusing to name the father of her illegitimate child, to life within a period-appropriate adaptation. Saltwick chose to keep Hester in the same colonial America that Hawthorne built, but she expanded the scene to show how Hester’s adultery affected her community. To do so, Saltwick created new characters, condensed the story and added entirely new scenes.

“I think Hawthorne loves Hester, but he’s afraid of her,” Saltwick said, “She is dangerous in this world in the way she resists apologizing for what she’s done by saying, ‘You’re right, it was a sin. I will stand this punishment, but it’s not going to break me.’”

Unlike Hawthorne, Saltwick isn’t afraid of Hester. Throughout the course of the play she highlights the flaws in Hawthorne’s heroine. Hester acts selfishly and she lies to her daughter, but she stands firmly by her personal convictions.

“My language is not Hawthorne’s language. It’s more simple, dramatic,” Saltwick said. “People can get away with saying some pretty beautiful things.”

“[Saltwick] did a good job of capturing her spirit,” Konkel said. “I love the way she writes because it is so conversational, but very beautiful.”

Despite the play’s early American time period, contemporary audiences can relate to the strain, judgment and emotional exhaustion that Hester feels.

“What [Saltwick] has created is a version of this book that can be activated in a theatrical way,” Wilson, the director of the play, said. “It celebrates the story and captures the spirit of the novel while not feeling the pressure to be absolutely, 100 percent faithful.”

Within this leniency, Saltwick creates a script that is strikingly poignant without distracting from the events that drive the plot of the play. In her three years at the Michener Center, Saltwick learned that she could employ a strong plot and action without losing the imagery of her prose.

“I spent a lot of time thinking about place and home and love, which are all things I still care about. But I don’t have a fear of making stuff happen on stage,” Saltwick said.

The power of the play, according to Saltwick, is the danger represented by the strong and evocative Hester: “the idea of losing each other to another way of life.”

For Saltwick, Hester becomes not only a driving agent of the plot, but a whisperer of life’s larger truths.

“I think we are meant for love,” Hester says in Act 2. “The laws give us direction, and God gives us meaning, but we can give love. Like nothing else on earth. We are empty without love. The act fills us.”

This simple, brutal prose carries “The Scarlet Letter,” and the undergraduate actors do not disappoint in their delivery of even the harshest and most difficult lines. The set is rustic and interactive, and the casting is well-done, but what makes the play hard, evocative and lonely are the words.

“I want the play to have a life after UT,” Saltwick said.

In context, she meant that she wants the play to be published and to live on in other theaters with different casts. With lines like “She’ll grow like a weed into something dangerous,” and “She is my happiness, my torture,” Saltwick’s version of “The Scarlet Letter” does more than just entertain. It lingers.

The Scarlet Letter runs through December 7 in the B. Iden Payne Theatre.