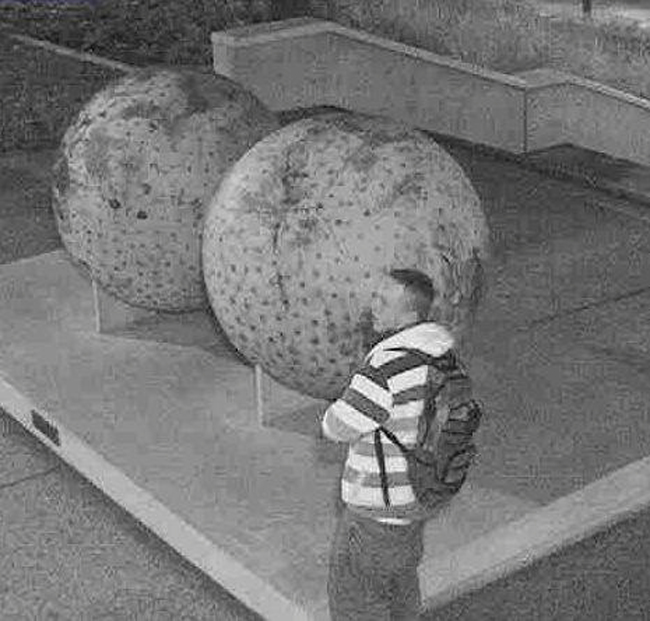 This UTPD surveillance footage shows a suspect in the A&M-related vandalism incident on campus Oct. 27.

UTPD released photos of suspects obtained from security footage of the tagging on Friday via the University of Texas Police Department Facebook page. UTPD officer Darrell Halstead said it appears there were two male vandals who are around the age of most college students.

UT spokesperson Rhonda Weldon said the tagging occurred between midnight and 5 a.m. Oct. 27. The security footage, along with most details about the case, cannot be released because the investigation is still ongoing. She said UTPD is working with the Texas A&M University Police Department to investigate the tagging.

Weldon said no arrest has been made at this time in relation to the case, and all the graffiti has now been cleaned up.

Halstead said UTPD has estimated it cost roughly $3,000 to clean up the graffiti, and the vandals in this case would be looking at a graffiti charge. He said normally that would be classified as a class A misdemeanor, punishable with a fine of up to $4,000 and/or up to one year in prison. Because the tagging was done on a university campus, the charge is raised to a state jail felony, punishable with 180 days to 2 years in a state jail and/or a fine of not more than $10,000.

Prominent UT landmarks including statues of Jefferson Davis and Woodrow Wilson in front of the UT Tower and the 1987 “The West” sculpture by Donald Lipski were tagged in red with the phrases “ATM,” “MUNGLOAF,” “Howdy,” “GIG ‘EM,” “FARMERS FIGHT,” “Whoop!,” “OLD ARMY Fight!,” “SEC!,” “GO AGGIES,” “CORPS” and “MISS US YET?.” Walls and sidewalks in the area surrounding the UT Tower, the Peter T. Flawn Academic Center and on the East Mall were also tagged.

This season for the first time since 1914, UT will not play Texas A&M in football. Instead, UT will play Texas Christian University this Thanksgiving after A&M joined the Southeastern Conference this fall. UT and A&M first began playing each other in 1894.

Halstead said anyone with information regarding the case should contact UTPD at (512)-471-4441.