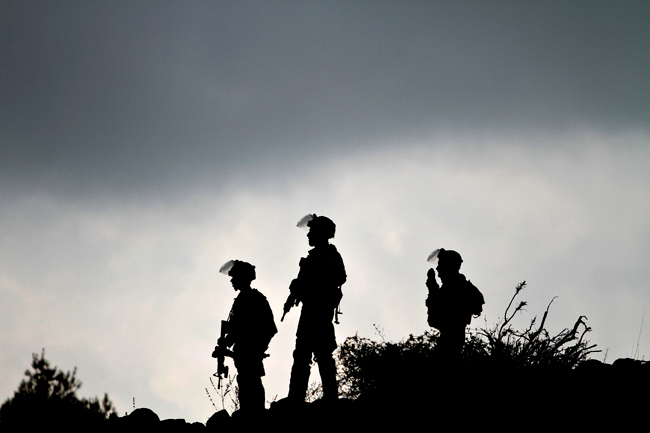 Israeli border policemen stand guard during a protest against Israel’s military action on the Gaza Strip in Birzeit, Monday, Nov. 19, 2012. Israeli aircraft struck crowded areas in the Gaza Strip and killed a senior militant with a missile strike on a media center Monday, driving up the Palestinian death toll to 96, as Israel broadened its targets in the 6-day-old offensive meant to quell Hamas rocket fire on Israel.

Egypt, the traditional mediator between Israel and the Arab world, was at the center of a flurry of diplomatic activity Monday.

Hamas wants Israel to halt all attacks on Gaza and lift tight restrictions on trade and movement in and out of the territory that have been in place since Hamas seized Gaza by force in 2007. Israel demands an end to rocket fire and a halt to weapons smuggling into Gaza.

With positions far apart on a comprehensive deal, some close to the negotiations suggested Egypt is first seeking a halt to fighting before other conditions are discussed.

Israeli leaders have repeatedly threatened to widen the offensive, saying an invasion is an option. Israel has amassed troops on the Gaza border and begun calling up thousands of reservists.

Still, an Israeli official emphasized that Israel hopes to find a diplomatic solution.

As part of global efforts to end the Gaza fighting, U.N. chief Ban Ki-moon arrived in Cairo on Monday and was to meet with Israeli President Shimon Peres on Tuesday.

The U.N. Security Council held closed-door consultations at the request of Russia, and Ambassador Vitaly Churkin later accused one country of foot-dragging, implying it was the U.S.