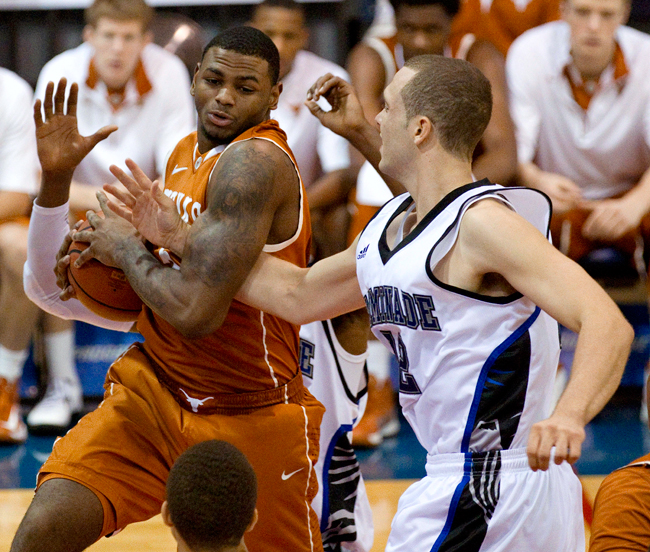 Jaylen Bond and the Longhorns fell to Division II Chaminade, 86-73. Texas committed 18 turnovers in the loss, falling to 2-1 on the year.

In what could be deemed the worst loss in the Rick Barnes era, Texas turned the ball over 18 times and never looked to be in-sync on either end of the court in a 86-73 loss to Division II Chaminade. Until Monday’s win, Chaminade had won just six games against 76 losses in the Maui Invitational since the tournament’s inception in 1984. The Silverswords, who compete in the Pac West Conference, had previously won just four games over Division I opponents in school history.

“We had guys that were scared,” Barnes said. “Standing around, you’ve got to take your shots, you’ve got to take them. Am I surprised? No, I’m not surprised. They’ve got some Division I transfers that have been around. It goes back to, I think players sometimes that play basketball have no clue what really goes on.”

With a bounty of blue-chip freshmen and a strong returning cast, Barnes and the Longhorns were expected to turn over a new leaf for the Texas program this season. Instead, Texas has turned over the ball an average of 13 times through three games and has left little room for praise with its sloppy early-season play.

Still without the services of point guard Myck Kabongo, the Longhorns struggled to keep possession and couldn’t maintain an advantage on the boards over a sizably smaller Silverswords squad. Kabongo’s backup, freshman Javan Felix led Texas with 17 points and five assists, but was once again plagued by mistakes and the lack of reliable support from his teammates. Sophomore forward Jaylen Bond had been cleared by the Texas medical staff to play, but was rendered ineffective after re-injuring the ankle that has kept him sidelined for most of the past month.

Chaminade’s fifth-year senior point guard DeAndre Haskins led all scorers with 32 points while connecting on 14 of his 15 free throw attempts. Haskins nearly recorded a double-double against the Longhorns. The Silverswords were able to outrebound Texas and shot 87 percent from the charity stripe, sealing their surprising win.

Moving forward, Texas has a gaggle of issues to tend to before it can even think about being competitive against any of its upcoming opponents. The remodeling starts with limiting turnovers and ends with improvement in almost every aspect of its game. With their season aspirations quickly trending southward, the Longhorns need to take a long look at themselves in their Maui hotel room mirrors in order to turn things around before their next game against either USC or Illinois, two teams that are more than capable of walloping the Longhorns at this stage in the season.