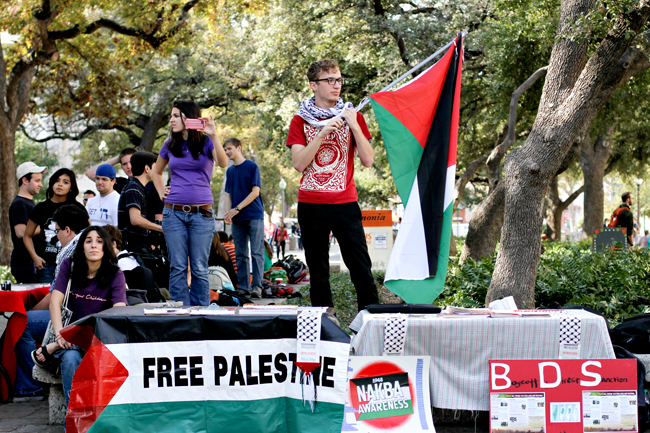 As the Israel-Gaza crisis becomes increasingly violent, people around the world and on the UT campus are paying more attention to it. Members of the UT community on multiple sides of the issue voiced their opinions Monday.

Roughly 20 students from the UT chapter of the International Socialist Organization and Palestine Solidarity Committee marched across campus Monday in support of residents of Gaza. They walked through the East, West and Main Malls as well as the halls of the Beauford H. Jester Center and the Student Activity Center chanting, “Free, free Palestine. Occupation is a crime.” Meanwhile, roughly 45 students from six organizations tabled on the West Mall in support of Israel.

The International Socialist Organization and Palestine Solidarity Committee set up tables on the West Mall as well.

Advocates on both sides of the issue worked to attract passing students to their table.

Tracy Frydberg, Middle Eastern studies and liberal arts honors sophomore and head of campus relations for Texans for Israel, said she has family in Israel and came out to support them and the other Israelis in fear for their lives.

She said the organization’s main goal in tabling was to better inform students of the issues surrounding the conflict.

“We are here to clarify, to answer questions, to be here as a resource for students on campus and to explain the issue and what is happening right now,” Frydberg said.

Frydberg said the more vocal approach to the situation taken by students from the International Socialist Organization and Palestine Solidarity Committee seemed ineffective to her as it didn’t educate people on the issues.

“We are not going to be doing anything like this,” Frydberg said. “These people are not here to clarify the situation. They are not explaining what is happening.”

“It forces a dialogue to happen, and a dialogue that happens is often uncomfortable for some people,” Orta said. “Just as when the South was segregated, you had these protesters of the Civil Rights Movement fighting for integration, but those conversations had to happen … the same conversations are what we are trying to have happen at UT.”

Journalism professor Robert Jensen spoke at the protest in support of the people of Gaza. He said the public must fully educate themselves on the issue since the situation’s history is essential for full understanding.

“You cannot understand what is happening in Gaza today without understanding one central fact — the occupation of Palestine by Israel,” Jensen said.

Ben Mendelson, government and liberal arts honors junior and chief financial officer for College Republicans, said he believes standing with Israel is an issue of safety, not politics.

“I don’t think it is an issue of political party,” Mendelson said. “There is overwhelming support on both sides of the aisle for American support of Israel.”

U.S. President Barack Obama and other politicians from both sides of the political spectrum have come out in support of Israel’s right to defend itself.

Protesters on both sides of the issue said they will be working more this week to advocate for their causes through similar efforts.