Adrian Phillips improves along with the Texas defense 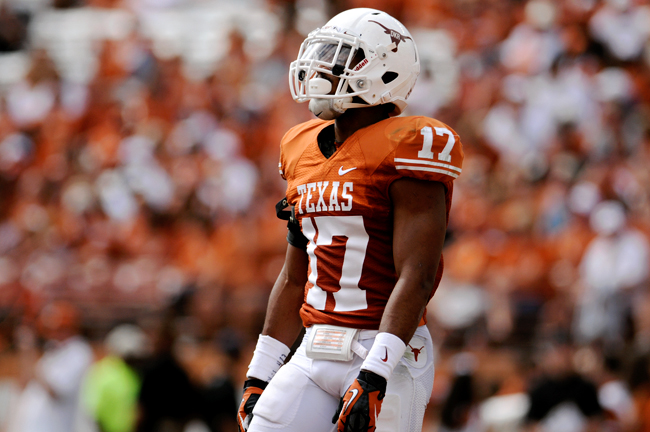 Junior safety Adrian Phillips (17) didn't have a picturesque start to the season, but after realizing the mistakes he was making he has steadily improved and earned the trust of his coaches and teammates once again. Phillips' improvements came after working on fundamental techniques like taking better angles and wrapping up in the open field.

Adrian Phillips had big shoes to fill. He followed safety Blake Gideon, who started all 52 games he played in at Texas.

But it took Phillips more time than he thought to excel in the starting safety spot.

“It was a struggle at the beginning of the year but me and (secondary) coach (Duane) Akina, we just talked about it and I just kept working,” Phillips said. “I couldn’t get too down on myself because the more you get down on yourself, the worse that you play. I just had to identify the problem and get it fixed.”

Throughout preseason, Phillips’ coaches spoke highly of his performance and of his abilities. But early on, he, along with the rest of the defense, performed below the standard that was expected.

He struggled through Texas’ first few games and lost his spot on top of the depth chart to sophomore Mykkele Thompson after poor performaces against Oklahoma State and West Virginia. Specifically, Phillips missed two open field tackles that led to two long touchdowns for Oklahoma State. Against the Sooners, Phillips was twice hurdled by fullback Trey Millard.

Phillips worked hard and found his way back to the top of the depth chart.

He and the rest of the defense are far from perfection. But missed tackles are gradually becoming less of an issue for them. Tackling is a basic skill for any defensive football player. So that’s what Phillips did. He went back to the basics.

He focused on taking better angles. He said he was trying to do too much at times and now he lets the play come to him. Phillips said the defense made the decision to be a dominating defense again.  Senior safety Kenny Vaccaro is a leader on the team and helped Phillips during his slump.

“I think he’s improved a lot,” Vaccaro said. “I think his confidence got down. I told him, ‘Bro, my junior year, I didn’t start out hot. Nobody was talking about me and then I got better. If you get better and better every game, that’s how you get better as a player.’ I think he really took that to heart and started playing better.”

Head coach Mack Brown noted that he has seen Phillips’ tackling improve as the season has gone on. Phillips and the rest of the defense used people’s negative criticism of them as an inspiration to play better.

“You have to take more pride in your work,” Phillips said. “You have to get it in your mind that this is what we’re going to do and we can’t allow the offense to do that.”

Phillips didn’t practice in the spring or fall due to a shoulder surgery. It is unclear if that was holding him back this season.

Alex Okafor, the other senior defensive leader, is glad to see Phillips’ improvement. Phillips and the defense used the negative criticism to inspire them to play better.

“One thing I’ll give to him, he has thick skin,” Okafor said. “He received a lot of criticism at the beginning of the season but he didn’t let it get to him.  He always kept a positive mindset. I’m just so proud of him for being able to stay on and stay confident and continue to elevate his game.”