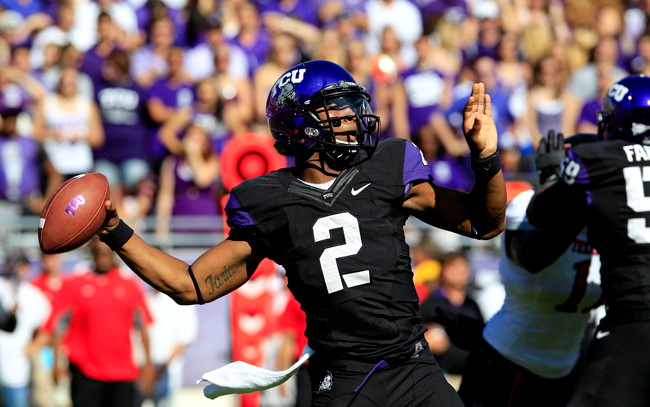 Josh Boyce: The Texas defense has made great strides the last few weeks in coverage and in its ability to tackle. When the Longhorns face off against TCU, this progress will need to be continued as they will face another small and quick receiver in Josh Boyce. The junior wideout has had an impressive year thus far, racking up 756 yards on 56 receptions. His seven touchdowns lead the team, and his 13.5 yards per reception make him a player to watch. At 6-foot, 203 pounds, Boyce is similar to other players that have given the Longhorns problems all season long. His quickness allows him to get away from defenders and pick up necessary yards after the catch even in good coverage. His talents were showcased beautifully against West Virginia when he caught six passes for 180 yards with two touchdowns. For those people doing the math, that amounts to thirty yards per reception, which evidences Boyce’s ability to run with the football in his hands. The Longhorns should look to press Boyce early and keep him from finding lanes to run through when he catches the football.

Trevone Boykin: Boykin is a player who was forced into early action this season with the indefinite suspension of starting quarterback Casey Pachall. The freshman has had his up-and-downs, but has showcased the ability to perform under pressure. In the nine games he has appeared in this season, Boykin has passed for 1,540 yards with fourteen touchdowns. His eight interceptions show that he can make mistakes when pressured, but the same can be said for most freshman starters. Boykin’s most impressive performance came against a tough Texas Tech team. Despite a triple overtime loss, his 332 yards passing and four touchdowns in the contest showed that he could match the firepower of the prolific Tech offense. He has showcased a bit of ability with his legs also, rushing for two touchdowns while acquiring a 4.6 yards per carry average when he does run. The Longhorns should look to force Boykin to remain in the pocket and make throws against the toughest defense he’s seen so far in his career. He has proven he can play under pressure, but his detriments and inexperience have also shown themselves and Texas should look to exploit this while trying to contain him.

Devonte Fields: The Texas offensive line must pay attention to Devonte Fields. The freshman defensive end has had a productive season, picking up eight sacks and 43 tackles. His 15.5 tackles for loss lead the Horned Frog defense as Fields’ relentless pressure clogs up a lot of running lanes for opponents to get through. His speed at 240 pounds is a deadly weapon and will force the offensive line of Texas to be on top of their game in this matchup. If Texas wants to keep Ash, and the running backs, off their backs they will need to contain the established freshman and keep him from racking up even more sacks. Fields’ name will definitely be called more than once on Thanksgiving Day.