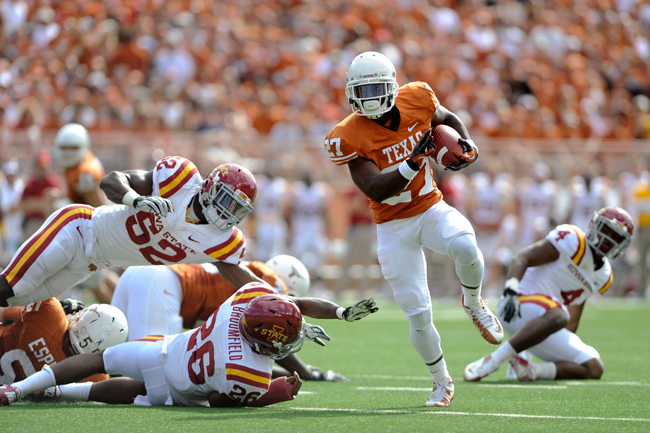 Freshman tailback Daje Johnson (27) finds a seam in the Iowa State defense during Texas' last game, a 33-7 win on Nov. 10. The Longhorns will face TCU Thanksgiving Day, but after this season their opponent is expected to change on a yearly basics after their long-standing committment to playing Texas A&M was dissolved.

This Thanksgiving, Texans will experience a new tradition. The rivalry that dominated college football in Texas for over 100 years ended when Texas A&M left the Big 12 for the SEC.

Now, the Longhorns will find a new in-state rival in TCU.

It’s certainly different, but the Texas players aren’t letting it get to them. They’re trying to win out and, though they don’t control their own destiny, potentially win a Big 12 title.

“We have to be ready for TCU,” junior safety Adrian Phillips said.  “A&M was a good rivalry and we ended it the way that it was supposed to be ended and now TCU is in our conference and they’re playing us this Thursday so we’re just going to have to take it to them.”

Kicker Justin Tucker hit a 40-yard game winning field goal as time expired to give the Longhorns a 27-25 win during their final matchup against the Aggies.

Texas, especially its seniors, is hoping to start this new in-state rivalry with a win.

“This could be the start of something,” said senior running back Jeremy Hills. “If it is, I’m glad we got the chance to start it. We’ve just got to make sure we start it off the right way. It’s pretty cool and I’m excited.”

It’s a start of something, likely a Thanksgiving alternation of games versus TCU and Texas Tech, but it is also an end for many players. It will be senior night at DKR and, though the class of 2014 is small, they will say goodbye to Texas and hello to the Horned Frogs.

The goal of this class was to get this team back on track after falling apart in 2010. Progress was made in 2011, when the Longhorns went 8-5. A 10-win season is now in sight. The next step is a win over a team Texas has only played twice since the breakup of the Southwest Conference in 1995.

“I’m happy to be playing on Thanksgiving,” said senior defensive end Alex Okafor. “It’s a primetime game, as big as any game in the season. Honestly if you’re going to mention A&M, I feel sorry for them not being in this game anymore because they don’t get the opportunity that we have to play in front of the whole country. So that’s what I’m excited about.”

Junior guard Mason Walters is excited that Texas is starting a new tradition with a team the Longhorns have a few things in common with.

“Tradition changes a little bit and that’s fun to be a part of,” Walters said. “Then again, it is different. Hopefully this first go-round will be something we start off right and maybe someday we finish right.”

Head coach Mack Brown is sad to see the end of the rivalry between the Longhorns and the Aggies. But, like Walters, he is also glad that the Longhorns will still play on Thanksgiving and against a SWC rival.

“When A&M left our league and the decision was made that the two teams would not play anymore, I felt like that I still wanted to play on Thanksgiving because I think it’s a great time to play for many reasons,” he said. “I’m really excited that we’re playing an old Southwest Conference rival and foe that has really done a great job in the BCS the last few years.”