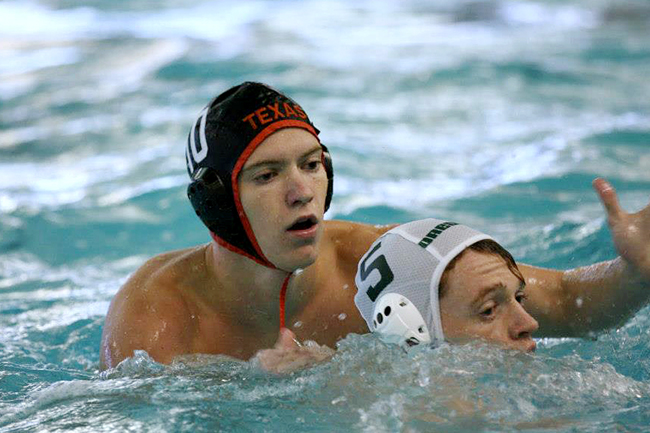 Texas’ Bobby Woolweaver guards an Oregon player. The senior has been a key part of the team and helped the Longhorns finish third at the national tournament. Photo courtesy of Mukesh Kapila.

To begin its season this fall, the Texas men’s water polo team competed within the Texas region, where eight teams battle for a first-place position to make it to their ultimate goal of Nationals. After remaining undefeated in the Texas division, the Longhorns were able to advance to the National Championship Tournament held Nov. 9 at Oregon State. There were 16 teams competing for the national title from across the nation and Texas placed third overall.

“Nationals is the culmination of their season and they played really well this year,” Coach Arseni Grokhovski said of his team.

As a big advantage, the team boasts two left-handers, along with two starting seniors with years of experience. They worked well together as a team and Grokhovski said that they played more cohesively.

“We got started a little slow in our first game against the Oregon Ducks,” senior goalkeeper Mike Kruckemeyer said. “We were trailing by three goals in the second quarter, but it gave us confidence to come back and beat them.”

Although the Longhorns fell short against USC, who later ended up winning the whole tournament, they defeated Utah to earn third place.

“It was a great experience,” senior guard Ricardo Bello said.

Bello was there at the 2010 Nationals, where the Longhorns placed second in the nation.

“I felt like it was even better than when we got second place because this year it was a stronger group of seniors, with a couple of younger classmen helping us reach our goal,” Bello said. “It was definitely like a feeling of a family.”

Many of the guys have played together for a while, ensuing a greater bond and success within the team.

“Chemistry was the number one thing for sure,” senior captain Kieran Kapila said. “Most of us have been playing together for at least five years since high school. So we all know each other and can all kind of click inside and outside of the water.”

Kapila has played water polo since eighth grade and was offered scholarships to many schools. Although men’s water polo is considered a club sport at Texas, Kapila chose to be a Longhorn.

“The thing about UT water polo is that we’ve been ranked nationally in the past few years, so I decided to come here and try to continue that tradition and make it even better.” Kapila said,

He was elected captain of the team his junior year.

“We didn’t do very well that year,” he said. “I was still just learning how to be a leader for the team and really how the team works. This year we had a lot of team bonding. We didn’t win last year, so we trained all season and even off-season to try and make it to the next level this year.”

Spending a lot of time together, whether it’s in practice or hanging out on the weekends, has benefited the team.

“You got to have that chemistry, it definitely helps,” Bello said.

In his third year coaching for the Texas water polo team, Grokhovski is aware that the team is in great shape when competing for Nationals, but enforces hard work and makes sure that the team practices in the off-season as well.