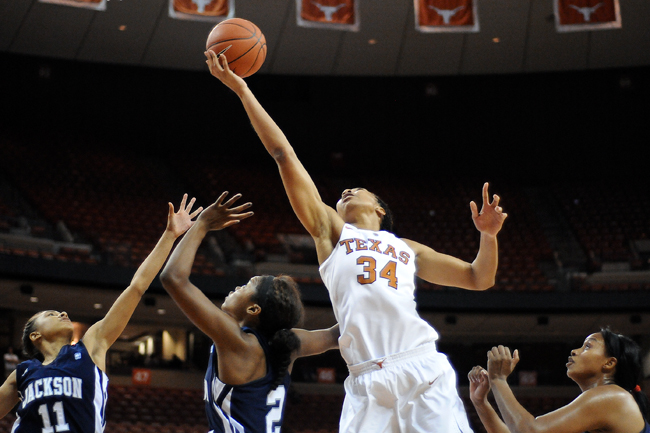 Freshman Imani McGee-Stafford jumps for the ball during Texas’ dominating 80-53 victory over Jackson State. In her third game as a Longhorn, she had twelve points and ten rebounds during the game. The Longhorns dominated the Tigers in the teams’ first meeting and advanced to 3-0.

As long as they’re crashing the boards, they’re winning games.

The Longhorns looked as impressive as they have all season long and defeated Jackson State 80-53 Tuesday. The Longhorns got everything they wanted down low, scoring 44 of their points in the paint while outrebounding Jackson State 55-36.

“Last year we were real guard-oriented,” forward Nneka Enemkpali said. “Now that we actually have inside presence, it’s going to make people play us different and actually respect our inside game.”

In the first half, Texas held the Tigers to 22.9 percent shooting while shooting 45.9 percent on its offensive end. The Longhorns came out a bit lackadaisical in the second half as they committed 12 more turnovers. But their increased effort and adjustments showcased their will.

“We were very shot-happy in the first half without extra passes or assists,” head coach Karen Aston said. “I thought we did a better job of looking to our post players in the second half, and I thought we tried to pick it up defensively.”

Despite their impressive performance inside, the Longhorns committed 24 turnovers in the contest. The Longhorns scored 24 points off Jackson State turnovers, but this did nothing to downgrade Karen Aston’s aggravation.

“It’s definitely a work in progress,” Aston said. “Our chemistry wasn’t as good tonight after we came off of a difficult week in practice and more importantly too long of a break in between games.”

Even with a lack of cohesiveness, the Longhorns had five players finish with double-figure scoring, showcasing a balance that makes them a nightmare for any team.

“I think we have good balance,” Aston said. “I think that we have an inside and outside game, and now if we can just learn what’s a good shot, then I think that we could be special.”

Although Cokie Reed played perhaps her best game of the season, showcasing the brilliance she’s capable of with 14 points and four blocks, her efforts were a bit overshadowed by the continued dominance of Nneka Enemkpali. The sophomore racked up her third consecutive double-double with her 24 points and 20 rebounds.

“I thought it was OK,” Aston said. “She’s so talented that if you have great habits to go along with talent then you’re going to have production, which is what is happening for Nneka.”

Imani McGee-Stafford’s 12 points and 10 rebounds cemented her as a player that can be a key contributor for the Longhorns the rest of the season.

Another dominating performance on the boards and in the paint gives the Longhorns momentum heading into their next game with an undefeated record.