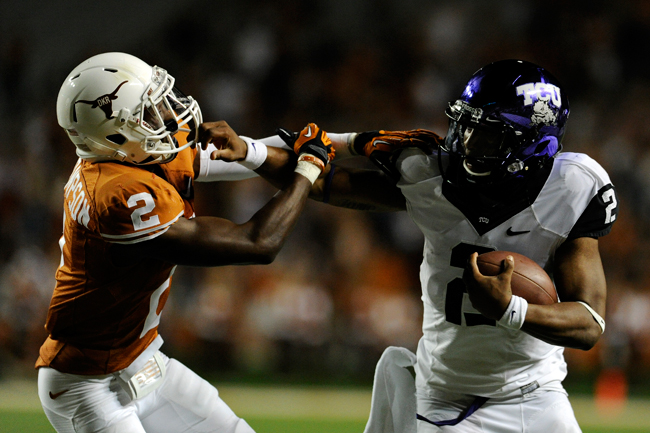 David Ash reverted to his 2011 form and Case McCoy failed to engineer another last minute Thanksgiving Day comeback, leading to a BCS-shattering loss to TCU.

Ash threw a pair of interceptions, fumbled once and completed less than 50 percent of his passes. That performance coupled with a dominant showing on the ground by the Horned Frogs — they rushed for 217 yards — and a last minute pick, was more than enough spur the Horned Frogs to a 20-13 victory.

“Four turnovers to one, you’re going to get beat most of the time,” head coach Mack Brown said. “In fact, it’s about 100 percent.”

The problems ensued for Ash early on. On the first drive of the game he led Texas right down the field, but then on a first down play from the TCU 30-yard line, Ash made his first mistake. Mike Davis broke open on a post pattern over the middle of the field, but Ash underthrew him, resulting in an interception.

The throw wasn’t far behind Davis, but the small mistake epitomized Ash’s, and the Longhorns, day.

TCU capitalized on the ensuing drive. The Horned Frogs worked a physical and persistent 96-yard drive, their longest of the season, converting on a fourth down conversion and by pounding away at Longhorns right up the middle.

The next possession the Longhorns, once again, moved the ball into the red zone. However, a dropped pass by Ryan Roberson, on what would have been a first down conversion, forced the Longhorns settle for a field goal.

It wasn’t a turnover, but it might as well have been. The Longhorns moved the ball well, but in four trips to the red zone they were able to produce only a single touchdown.

“Crucial mistakes in the red zone that really hurt us in the long run and killed morale a little bit,” offensive lineman Trey Hopkins said. “It just put us in bad spots.”

Ash’s biggest mistake of the game came on a late second quarter drive with Texas down 7-3. The Longhorns moved the ball 62 yards to reach TCU’s 18-yard line, and after Johnathan Gray was stuffed for no-gain on first down, offensive coordinator Brain Harsin called for a shot to the end zone.  Ash took the snap and looked for Mike Davis streaking across the middle. But what he failed to see was safety Elisha Olabode moving down to jump the route, resulting in a pick.

The play earned Ash a seat on the sidelines for the remainder of the quarter, as McCoy entered to finish the half.

“Don’t need to have it anymore,” Brown said in reference to Ash’s second interception. “It kills you when you throw interceptions. It really kills you in the red zone.

Ash returned in the second, but only led Texas to three points over the next quarter and a third. So, with 10 minutes remaining McCoy entered the game once again, this time providing a spark.

He failed to produce on the first drive, but on the second he delivered a touchdown to launch Texas back into the game.

“Case had a little bit more drive [then David],” running back Jonathan Gray said. “He got the guys going and told us ‘hey the games not over, we can still make plays.”

The defense forced a quick three-and-out on TCU’s next possession, giving Texas and McCoy a second straight opportunity on Thanksgiving to make a magical comeback – McCoy led the Longhorns on a last minute drive to beat Texas A&M last Thanksgiving.

It wasn’t to be against a new turkey day foe though.

Texas received the ball with 1:44 remaining, and on the first play McCoy scrambled for 13 yards. He’d look like he might make a similar play on the next snap too, but his gunslinger mentality got the best of him. McCoy scrambled right, left and then right again to shed a charging TCU pass rush, and instead of stepping out of bounds for a five-yard gain, he took a risk. McCoy lobbed the ball down the field to a streaking Cayleb Jones despite having three defenders in the area, and the Horned Frogs came down with the ball. It was Texas’ fourth turnover of the night, and an anti-climactic end to what would’ve been a legendary moment.

“I was 100 percent sure that was going to be the situation,” Hopkins said. “Case came in and had that fire in his eyes. I definitely thought we were going to pull that one out.”

The loss put a sour taste on senior night and eliminated any possibility of a BCS bowl for the Longhorns.

“The loss leaves a really bad taste in our mouths right now,” offensive guard Mason Walters said. “We’re doing a lot of things right now that are good during the week. We just need to show up on game day.”