Texas struggles in first half against TCU 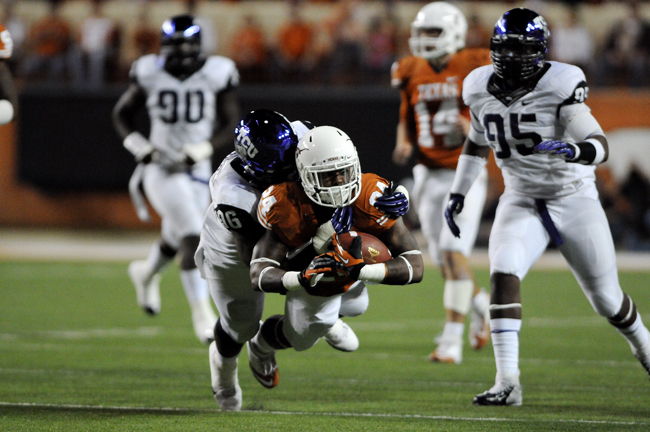 Texas running back Joe Bergeron is tackled during the first half. Bergeron had five carries for 12 yards.

Texas, especially its offense, struggled early against TCU, giving the Horned Frogs a 14-3 lead at halftime.

After a promising start to Texas’ first drive with Johnathan Gray rushing for 23 yards, David Ash was picked off by Jason Verrett on a pass intended for Mike Davis.

Texas’ run defense struggled throughout the first half and allowed 70 rushing yards on TCU’s first drive.  Their 94-yard drive ended with a 2-yard touchdown run from Matthew Tucker.

Though Ash threw a 16-yard pass to Jaxon Shipley to get Texas on the TCU 14-yard line, they were stopped at the TCU eight. Nick Jordan hit a 25-yard field goal to make the score 7-3 to end the first quarter.

In the second quarter, the Longhorns stopped the Horned Frogs on third and one.  But TCU’s Jaden Oberkrom missed the 33-yard field goal.

Ash was picked off in the red zone for the second time in the half on a pass intended for Shipley.

Ash’s struggles continued after he fumbled the ball giving the Horned Frogs possession on the Texas 16-yard line.  An 11-yard gain by Tucker gave the Horned Frogs the ball on the one.  He then ran it in for a touchdown, giving TCU a 14-3 lead.

Case McCoy replaced Ash at the end of the half.