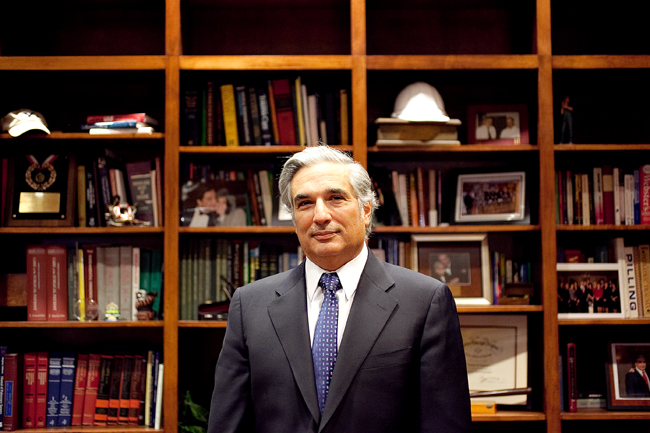 Even in his role overseeing one of the nation’s largest university systems, UT System Chancellor Francisco Cigarroa is first and foremost a physician.

Since his appointment as chancellor in 2009, Cigarroa has taken on his duties in what he described as a medical approach — leveraging technology, taking calculated risks and changing course when things don’t work out.

“I think it’s worthwhile taking a little risk in higher education if it’s for the right reasons,” Cigarroa said. “Sometimes we’re so risk-adverse that in fact we’re a little paralyzed. If I was nervous every time I made an incision, I don’t think I’d be a good surgeon.”

He said his medical approach is essential to his Framework for Advancing Excellence, a nine-pillar action plan of System priorities that has guided almost all actions voted on by the UT System Board of Regents since it was approved in August 2011.

The framework’s mission has led to four-year graduation initiatives, developing relationships with technology-based corporations to improve advising and online learning and setting forth the foundation for two new medical schools in Austin and South Texas.

Cigarroa said the framework, which aligns the goals of the regents, the system administration and the institution presidents, was a priority when he began his tenure as chancellor.

The framework has garnered national attention, and Cigarroa was invited to discuss the pillars of the framework with other higher education officials at the White House this past year.

While the framework has received criticism for implementing micromanagement and lacking quantitative measures, Cigarroa said he likes to be innovative and try new things, and keeping up with a changing model of higher education is one of the most energizing parts of his job.

“Otherwise we’d be treating diseases the way we did 100 years ago,” he said. “I like to plan for the future.”

One framework goal yet to be completed is the implementation of performance-based compensation plans for presidents of the System’s nine academic institutions.

“It’ll be interesting because we’re one of the first university systems to try to this beyond health institutions,” Cigarroa said.

The metrics of the plan for each president will be discussed at the upcoming regents’ meeting in December. The presidents will be able to earn bonuses of up to 10 percent of their salaries based on those performance measures.

With the upcoming legislative session, Cigarroa’s third as chancellor, he said the System is supportive of two educational initiatives — outcome-based funding and four-year fixed tuition rates.

Both initiatives have already been filed as legislative bills by Rep. Dan Branch, R-Dallas. The System will push for metrics that fall in line with each institution and its demographics to provide tuition options rather than regulations, Cigarroa said.

Cigarroa said he originally planned on returning to surgery full time after his tenure as president of the UT Health Science Center in San Antonio for almost nine years, when the position as chancellor opened up.

“The real ‘ah-ha’ moment was when I realized education saves lives,” Cigarroa said.

Cigarroa is on call every third weekend and does liver and kidney transplants in San Antonio. The shelves in his office are lined with portraits of his family, most of whom are also involved in medicine.

Cigarroa and four of his nine siblings all practice medicine. The Cigarroa Heart & Vascular Institute is housed in one of Laredo’s two hospitals, and cardiologist listings in the local phone book include the offices of Carlos and Ricardo Cigarroa. His father Joaquin Cigarroa still practices cardiology in Laredo at the age of 88.

“You will never separate the love for medicine from a Cigarroa,” the chancellor said. “It’s in our genome.”