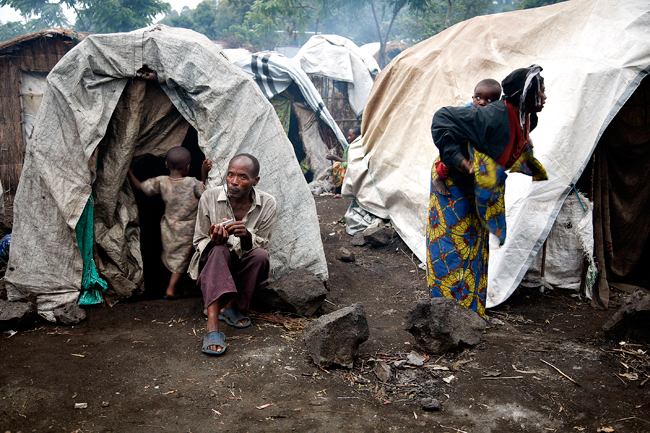 An internally displaced Congolese man listens to the radio Saturday. Regional leaders meeting in Uganda on Saturday called for an end to the advance by M23 rebels toward Congo's capital, and also urged the Congolese government to sit down with rebel leaers as residents fled some towns for fear of more fighting between the rebels and army.

KAMPALA, Uganda — Congolese officials are in talks Sunday with representatives of M23, the rebel group that last week took control of the eastern Congo city of Goma, according to Ugandan officials.

Ugandan Defence Minister Crispus Kiyonga said that he is mediating discussions to help both sides reach a settlement that would end a violent rebellion that has sucked in Uganda and Rwanda, which both face charges of backing the rebels.

M23 President Jean-Marie Runiga is leading the rebels in the talks, according to Rene Abandi, M23’s head of external relations.

Abandi, who is now based in the Ugandan capital Kampala, said M23 representatives met with Congolese President Joseph Kabila in a tense, two-hour meeting that was also attended by Ugandan President Yoweri Museveni.

“He tried to accuse us and we also tried to accuse him,” Abandi said of the meeting with Kabila on Saturday. “It was a meeting to have a common understanding of the principle of negotiation. (Kabila) said he’s ready to negotiate directly with us.”

But some Congolese officials in the capital Kinshasa have said there will be no talks with the rebels unless they quit Goma. A regional summit of the International Conference on the Great Lakes Region in Kampala — attended by both Kabila and Museveni — on Saturday called on the rebels to leave Goma and urged Kabila to listen to the “legitimate grievances” of M23.

Despite the regional leaders’ demands for the rebel forces to withdraw from Goma, M23 soldiers were visibly in control of the city Sunday. M23 also still held Sake, a contested town 25 kilometers (15 miles) west of Goma. The Congolese army attacked the town Saturday, but M23 retained control.

M23 President Runiga said that withdrawal from Goma was “under consideration” and, while M23 did not oppose the idea “in principle,” no decision had been taken yet, according to M23 spokesman Lt. Col. Vianney Kazarama, speaking to the Associated Press. Runiga is still in Kampala and no official response to the demands from the regional summit is expected before his return to Congo, said Kazarama in Goma.

“We are waiting to hear from Runiga when he will be back from Kampala,” said Kazarama.

“Since May we have asked to meet with President Kabila,” said Amani Kabasha, M23’s deputy spokesman. “At least now there has been contact. The door is open for talks to find the durable peace that eastern Congo needs.”

Government troops remain in Minova, 25 kilometers (15 miles) south of Sake, following a failed attack on M23 last Thursday. Unruly Congo army soldiers had looted residents for the third night running, according to a United Nations official in the town who insisted upon anonymity because he is not authorized to speak to the press. U.N. peacekeepers patrolled Minova throughout the night to protect civilians from the rampaging government troops.

In Minova, Congo Gen. Francois Olenga, who was recently named head of the Congolese army, held meetings with area commanders . “The country is in danger. We cannot defend our country with traitors,” said Olenga to The Associated Press.

Pickup trucks packed with Congolese army soldiers armed with automatic rifles and rocket propelled grenades sped through Minova to regroup at the local soccer stadium. Army soldiers were also walking in the streets, looking for food. Some army soldiers were selling cigarettes on the side of the road.

“Let them attack us!” said M23 spokesman Kazarama. “Do they have the strength? Absolutely not, we are in a strong position.”