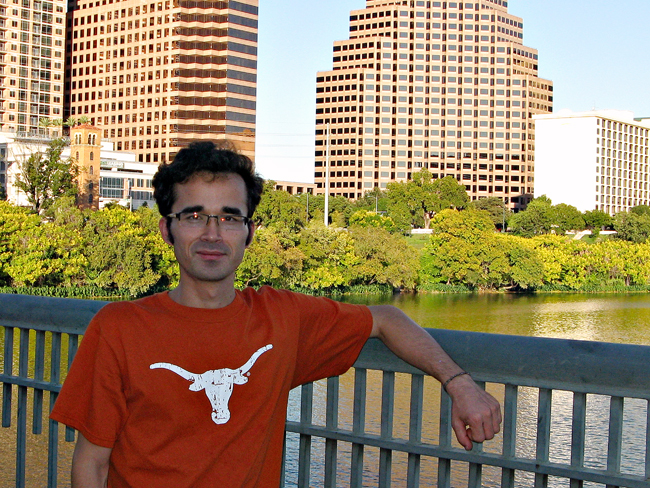 Photo courtesy of the Kokabee family). " />

A past inmate of the Iranian prison where former doctorate student Omid Kokabee is serving a 10-year sentence sat down with The Daily Texan to explain what life in the prison is like.

Dr. Kamiar Alaei, who served more than two years as a political prisoner, said that alongside a lack of safety, space and basic human rights, poor health care is a major problem at Evin Prison in Iran, located in Evin, a northwestern section of Tehran. Alaei said Kokabee faces the dangers normally associated with U.S. prisons, including violence, sexual assault and theft, in addition to these conditions.

Alaei said most prisoners have access to basic health care, but because Kokabee is a political prisoner, he faces harsher conditions. Though a prison doctor recently diagnosed Kokabee with kidney stones, he hasn’t received the inpatient care the doctor recommended and has lost six kilograms, roughly 13.2 pounds, as a result.

“The solitary is six-feet-by-four-feet,” Alaei said. “There is light 24 hours a day, limited access to restrooms and no access to fresh air. You are blindfolded with no access to an attorney, no access to family visits and you are under interrogation for hours and days and weeks.”

He said inmates in solitary confinement must follow a special procedure when they want to use the restroom.

“There was a piece of paper that they gave to us, that we could throw out,” Alaei said. “If by any chance the prison staff passed by, which might not have been for several hours, they would see that and we could go to the restroom.”

Alaei said inmates in the political prisoner unit wake up at 6 a.m. each day, go outside to the jail yard and stay there until 10 p.m. when they go to sleep. He said the prison yard, roughly 3,600 square feet, holds roughly 200 people.

Alaei also said the cells each contain roughly 30 prisoners but only 15 beds.

Kokabee has been jailed in Iran since he was arrested in February 2011 while visiting family. Charged with conspiring with foreign countries in plots against the Iranian government, Kokabee was sentenced to 10 years in prison. Recently, he was sentenced to an additional 91 days without trial for earning illegal money after other inmates paid him to teach them English, Spanish, French and physics.

Alaei said Kokabee has only been able to visit face-to-face with his family once since he was imprisoned, and he is not able to safely complain about the situation.

“At anytime, for no reason, they may send [prisoners] back to solitary, if they just complain, if they just say, ‘Well I want to meet with my family,’” Alaei said.

He said execution is another possibility for prisoners at Evin. According to Amnesty International’s 2011 report on human rights, Iran is second to China in total number of executions.

The Alaei brothers are planning an international day of protest to advocate for justice for Kokabee to supplement physics professor Herbert Berk’s petition to the Iranian government for a fair retrail for Kokabee. Thus far, the petition has gained 590 signatures.

UT has not taken an official stance on Kokabee’s situation.

To access the petition asking the Iranian government to give Omid Kokabee a fair retrial go to: http://www.gopetition.com/petitions/fair-retrial-for-omid-kokabee/signatures.html.

Printed on Monday, Nov. 26, 2012 as: Past inmate uses story to rally support, awareness