Texas Longhorns suffer for more than a loss this Thanksgiving 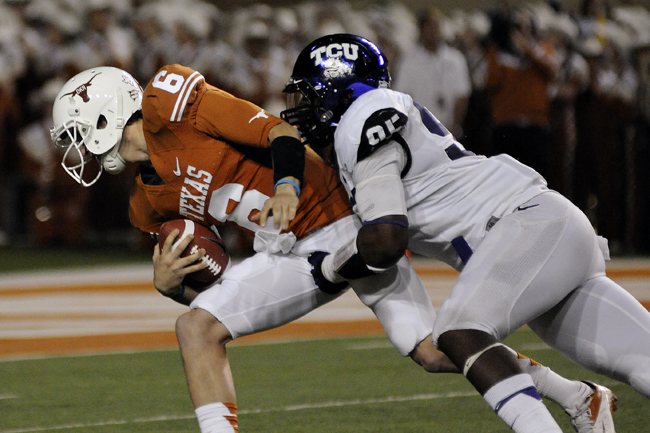 Case McCoy is brought down by TCU’s Devonte Fields during Texas’ 23-10 loss last Thursday. The Longhorns fell to 8-3 on the year.

Just when the Longhorns looked like they had turned the corner, TCU rolled into Austin and stuffed them like a turkey.

The Longhorns disposed of Texas Tech and Iowa State with ease. They headed into the Thanksgiving tussle against TCU with chances to win the Big 12 and earn a BCS bowl berth.

But Texas blew those chances with an embarrassing 20-13 loss to the Horned Frogs on Thursday night.

“We missed a great opportunity tonight to get back in the mix for some things,” head coach Mack Brown said. “I thought the kids played hard. I was proud they hung in there. I was proud they fought ‘till the end. Disappointed that we played so poorly on offense.”

TCU has a redshirt freshman under center that was preparing to play tailback before being named the starting quarterback and one senior starter on defense. The Horned Frogs, who had not won a game in regulation in more than a month entering last week, had no business leaving town with a win.

But, thanks to a sluggish Texas offense and bafflingly conservative playcalling, that’s exactly what they did.

Now, unless TCU pulls off another upset next week over Oklahoma, the Longhorns are likely Cotton Bowl-bound, regardless of whether they beat Kansas State in Manhattan this Saturday.

As for the upset the Horned Frogs reeled off this past week, they had plenty of help.

After impressive performances in the last two weeks, David Ash was hesitant and inaccurate. He committed three first-half turnovers as Texas went into halftime trailing 14-3.

TCU left Texas bruised and beaten, adding multiple injuries to severe insult. Running back Jeremy Hills and linebacker Demarco Cobbs are out for the rest of the year. Ash (ribs), Marquise Goodwin (thumb) and Alex Okafor (ankle) are banged up too.

But what hurts even more is the harsh reality that Texas could very well go 8-5 for the second straight year. Unless the Longhorns triumph in Manhattan this week — something they haven’t done in a decade — or win a bowl game, that’s what will happen.

For a program that showed so many signs of significant improvement, it would be a horrible disappointment.