Alicia Keys’ Girl On Fire does not disappoint 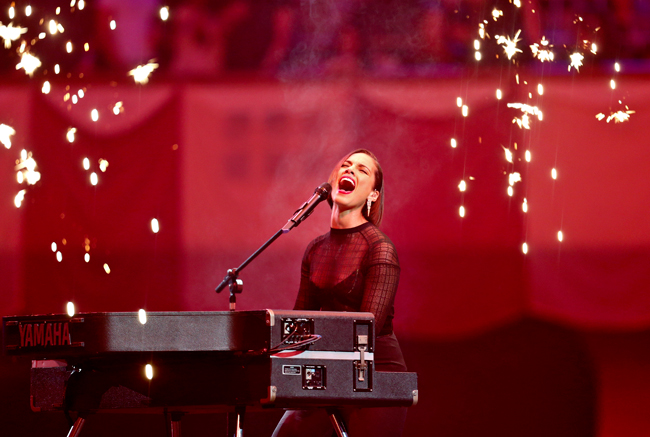 US singer Alicia Keys performs during the 2012 MTV European Music Awards show at the Festhalle in Frankfurt, central Germany, Sunday, Nov. 11, 2012. Her new album Girl on Fire is a solid continuation of her neo-soul sound.

“It’s been a while, I’m not who I was before,” Alicia Keys sings on the first full track of her fifth studio album Girl on Fire, released Monday by RCA Records. The song is preceded by a somber, elegant piano intro that effectively sets the tone for the album’s 13 tracks.

“Brand New Me” is the 31-year-old Harlem-born neo-soul singer’s opening statement, a suggestion that Girl on Fire marks a new direction in her 12-year career as a major label recording artist. In reality, the album never ventures too far from Keys’ established formula of introspective Prince-meets-Stevie-Wonder soul-pop, which isn’t a bad thing at all.

Keys has made a living off writing songs that emphasize her subtle self-assuredness. Her determination has paid off in sustained stardom and critical respect, even if the songwriting itself does not always live up to the highest standards.

Fortunately, the album’s high points outnumber the lows. Title track and lead single “Girl on Fire” features the juxtaposition of a viciously rapped intro by Nicki Minaj over an iron-laden ‘80s drumbeat that somehow metamorphoses into a soaring doo-wop-influenced ballad that showcases Keys’ prodigious vocal talents.

Other highlights include the ominous fuzz-tone of “When It’s All Over” and the hypnotic space vibe of “Listen to Your Heart.” The latter, co-written with John Legend and co-produced with Rodney “Darkchild” Jerkins, comes from somewhere way beyond left field, transporting the listener into a futuristic ride through a set of neon lights and tunnels, with Keys’ soft croon serving as guide.

The second half of the album wanes somewhat, with an obvious nadir at the predictable, love-is-better-than-money piano ballad “Not Even the King.” “That’s When I Knew” comes across as equally trite, an overly maudlin love song that brings nothing new or interesting to the art form aside from the pleasant acoustic-guitar-and-shaker production.

The album closes out with three strong songs, starting with the world-music-inflected but oddly titled “Limitedless.” “One Thing” and “101” wrap things up with two strong ballads, notable for their collective sense of honesty and urgency. Finally, Keys reaches back for one last vocal climax on the unlisted outro, defiantly screaming “Hallelujah — kicked down the door!”

It’s an appropriate ending for an album that doesn’t necessarily mark a drastic change in direction, but rather represents a continuation of a steady and thoroughly enjoyable course.

The Newfoundland folk rockers release the first compilation of their two-decade career, available as a box set or a double-disc album. The retrospective features 40 of the band’s most popular songs, including “Run Runaway” from 1996’s Up and “Good People” from 2010’s Safe upon the Shore.

American rappers Ghostface Killah and Sheek Louch team up to form Wu-Block, an allusion to each of the artists’ previous groups (Wu-Tang Clan and D-Block). The album features 16 tracks of hard-core explicit hip-hop, reminiscent of the days of Nas, 2Pac and Biggie Smalls.

The English punk rockers celebrate three decades of bashing out Celtic-inspired, alcohol-fueled rock ‘n’ roll with a double live album that also serves as a summary of their career thus far. The album is available on CD, DVD, vinyl or as a comprehensive box set.

Printed on Tuesday, November 27, 2012 as: Keys smolders on new album as Girl on Fire