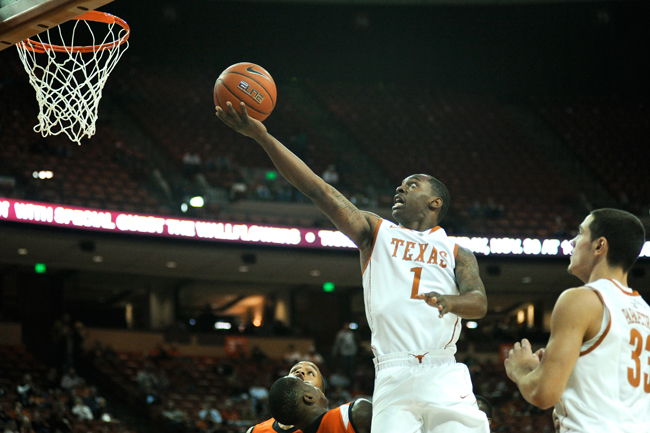 Sophomore Sheldon McClellan shoots during Texas’ 65-37 win over Sam Houston State. McClellan led the Longhorns in scoring for the fourth time this season with 16 points and he went six-for-six at the free throw line.

Once again, the Longhorns weren’t great on offense. But they didn’t have to be.

Texas held Sam Houston State to 21 percent shooting from the floor in a 65-37 victory Tuesday night — the second lowest by a Longhorns opponent in the last 15 seasons. Texas was not spectacular itself, shooting only 39.5 percent from the floor and committing 19 turnovers, but managed to win its first game since returning from the Maui Invitational.

The Longhorns suffered disappointing losses to Division II Chaminade and USC in Maui but have since won two straight. With Texas and Sam Houston State tied, 4-4, nearly six and a half minutes into the game, it seemed like it would take a while for the Longhorns to pull away. But a 12-0 run over a 3:40 span in the first half gave them a big lead and set them up for a lopsided victory.

Sophomore point guard Myck Kabongo missed his sixth straight game as the NCAA continues its investigation into allegations that he received impermissible benefits earlier this year. Fellow sophomore Jaylen Bond was also out with a left foot injury.

“I can sit here and tell you that if we had Myck Kabongo and Jaylen Bond, there’d be a lot of things that were different,” head coach Rick Barnes said. “They’re our two toughest games, our two best rebounders. Other guys are learning how to talk.”

Jonathan Holmes scored 10 of his 11 points before halftime while Julien Lewis scored all 10 of his points in the second half. Sheldon McClellan, for the fourth time this year, led the Longhorns in scoring, this time with 16 points, but on just 4-for-13 shooting. Despite being the team’s leading scorer, McClellan came off the bench, playing 28 minutes.

“What we’ve told our guys from Day 1 is that we’re going to play the guys that we call ‘everyday guys,’” Barnes said. “We think Sheldon can be a really special player. Sheldon doesn’t realize how good Sheldon can be. He can be a prolific scorer in so many ways.”

After getting outrebounded by the Bearkats 21-18 in the first half, the Longhorns turned things around in the second half, outrebounding Sam Houston State, 29-11.
All three of Texas’ sophomores scored in double figures, accounting for 37 points while the team’s freshmen accounted for 14 of its 19 turnovers.

“As sophomores, we definitely need to step it up, especially with Myck and Jaylen out,” Holmes said. “The young guys haven’t been through it yet so we have to help lead the way.”

Bearkats point guard Paul Baxter, an Austin Bowie product whose father, Ron, was a four-year starter for Texas from 1977-80, scored a team-high 12 points for Sam Houston State on 4-for-9 shooting. The rest of his team was just 9-for-53 (17 percent) from the floor.