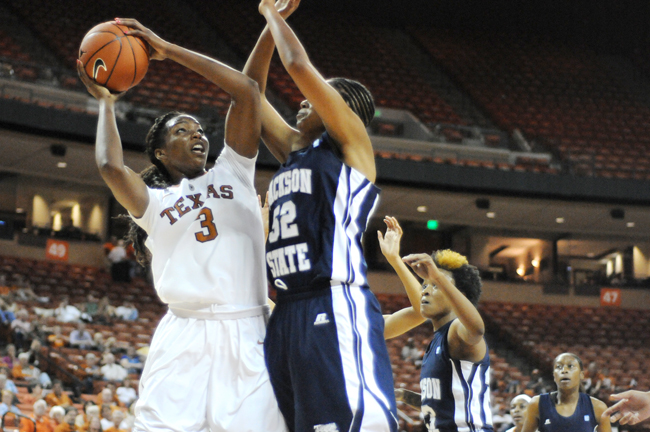 Sophomore Nneka Enemkpali shoots the ball during Texas’ win over Jackson State.  Enemkpali has posted four double doubles in a row so far this season.

If the world actually ends next month, Nneka Enemkpali will leave on top of it.

From crashing the boards and blocking shots to scoring points at will, Enemkpali is off to a remarkable start this season. Through four games, she’s averaging 24 points and 13 rebounds per game while garnering much deserved respect.

“To go rebound the ball is not the most popular thing to do, but the perseverance Nneka has shown this year speaks volumes to the work she has put in,” special assistant coach Stacy Stephens said. “She literally can grab the ball off the rim, and just how naturally strong and athletic she is has been the most impressive thing so far this season.”

Four straight double-doubles to begin the season have propelled Enemkpali into the limelight, earning her two Big 12 Player of the Week honors. Although she’s the first Texas player since 2006 to have such a streak, it’s merely an afterthought in her game plan.

“I think in the Jackson State game when I got my third double-double I didn’t really see the production,” Enemkpali said. “I try to go as hard as I can and I guess I just reap the benefits.”

After a dominating 24-point, 20-rebound performance against Jackson State earlier this season, the potential that coaches and peers have raved about since she stepped on campus is starting to materialize.

“If she had played harder the first half she would have had 25 rebounds, that’s how talented Nneka is,” head coach Karen Aston said. “She has so much potential and it’s becoming real. It’s not just potential anymore.”

Enemkpali is starting to realize that potential as well.

“It’s really up to you to make yourself what you want to be as a player,” Enemkpali said. “But I feel like I have the potential and I just need to tap into it and just continue to grow each and every day in practice with my team.”

Enemkpali has shown unparalleled talent to this point in the season. After a decent freshman season, she’s made great strides in putting everything together with a new direction.

“The biggest thing that’s different from last [year] would be my mindset,” Enemkpali said. “With a new coaching staff, everything is different, and all of us are buying into Coach Aston’s system and doing what she is telling us and reaping the benefits on the court.”

A dominating force inside, Enemkpali has been key in the Longhorns’ rebounding clinics this season. While she’s doing almost everything right, more work needs to be done in her eyes.

“I think that I need to learn how to lead better for my team,” Enemkpali said. “I try to lead by example so I need to be more of a vocal leader out there and try to command more from my teammates.”

Although Enemkpali’s early-season performances have made her a star, she knows the importance of playing as a team.

“Basketball is a game played with five people,” Enemkpali said. “You need a team around you to support you, and there are just a lot of aspects to the game of basketball, so you can’t really focus on the individual.”

That team that Enemkpali prides herself on is 4-0 to start the season, and hopes are high for the rest of it. While a national title is always the main goal, Enemkpali hopes to gain something more for the program.

“Another big goal for me would be just to reestablish the program here at the University of Texas,” Enemkpali said. “We’ve had semi-successful teams the last few years, so my biggest goal is to just get us back to what it needs to be like at Texas.”

With all of the hype now surrounding her and her team after a fast start, basketball can become overwhelming. Enemkpali does her best to maintain all priorities.

“You know there’s so little time that you have outside of basketball,” Enemkpali said. “But if I’m not playing basketball I’m purely stuck
down on my academics.”

With the stars aligning and everything going her way, Nneka Enemkpali should now be considered among the Longhorn elite.