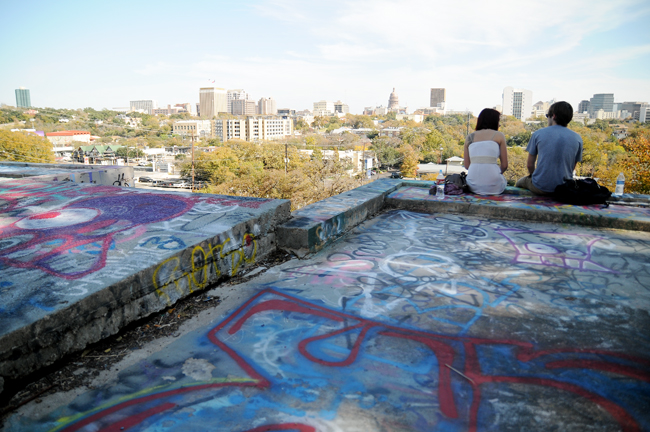 Education sophomore Brent B. and Austin native Camille Reid hang out on top of Castle Hill graffiti walls on Baylor street Monday afternoon. The two consider the walls an attraction where families and tourists come to visit even though it was once known as a place where the homeless linger.

The stretch of Guadalupe Street that runs along the western edge of the UT campus serves as a condensed sampling of all things Austin. From the taco bars to kitschy vintage clothing stores, the Drag provides UT students and visitors with all the comforts of Austin just steps fromthe campus.

Perhaps the quintessential aspect of the Drag, however, is not the breakfast tacos or the overpriced pizza slices but the colorful art that adorns the walls of the businesses that line the sidewalk.

Guadalupe Street is home to one of Austin’s most iconic pieces of street art: Daniel Johnston’s “Jeremiah the Innocent,” most commonly referred to as the “Hi, How Are You?” frog, which marks the beginning of the Drag.

Johnston’s frog has boldly sat on the otherwise blank wall at the corner of 21st and Guadalupe streets since Sound Exchange records commissioned the piece in 1993, but there have been attempts to deface the frog over the past 18 years. In this case, graffiti is serving as the bully to its more sophisticated relative, street art.

Julia Narum, leader of the graffiti abatement initiative through the Austin Youth Development Program, said the UT campus and the neighborhoods surrounding it are a highly targeted arena for graffiti and tagging.

“There are some things that are iconic that we respect,” Narum said. “But other people have come along and done graffiti on top of it.”

Aside from the commissioned murals of Bob Dylan, Stevie Ray Vaughan and, of course, Johnston’s frog, there are plenty of haphazardly sprayed tags that stand unabashedly on many campus and city surfaces.

Austin citizens are encouraged to report to 3-1-1 graffiti sightings, from tags on blank surfaces to tags over pieces of commissioned art. Narum’s graffiti abatement crews then remove the reported blemishes as well as any other tags in the area.

According to Meghan Turner, administrator of the Art in Public Places program, it is not hard to distinguish graffiti from commissioned street art.

“There is a distinction between painted mural pieces and graffiti,” Turner said. “Usually graffiti is things like tagging.”

Art in Public Places is a city ordinance-driven program that allows for site-specific artwork to be commissioned around the city. This includes a wide range of media, from statues to murals and the occasional gate.

“We don’t commission very many murals anymore,” Turner said. “Murals are one of the hardest things to maintain over a long period of time.”

Turner said this has to do with the durability of paint on outdoor, concrete walls and also the fact that graffiti makes common, unwanted guest appearances on many of the city’s elaborate murals.

Narum said sometimes the artists who created pieces of art come to touch up the murals when graffiti appears over them.

“Graffiti is something that is written or spray-painted on somebody else’s property,” Clarke said. “Street art should be art that is commissioned by the owners of the surface.”

Graffiti, no matter how elaborate, does not have a place in the realm of art, Clarke said.

“It’s vandalism even if it has artistic merit because the people who own the property don’t want it to be there,” Clarke said.

There are several instances in Austin, however, where simple graffiti has been transformed into iconic examples of street art simply by reputation.

The “I love you so much” tag on South Congress Avenue has been immortalized through many Facebook profile pictures and even appears on canvases and other things that some innovative local artists sell and profit from.

Although the “I love you so much” tag first appeared as graffiti, Austinites can expect the piece to stick around for a while.

Despite the continued efforts of the graffiti abatement program, it is hard to walk anywhere in Austin without coming across some form of graffiti. It has blended into the walls, the sidewalks and the very fibers of the city.

“[Graffiti] is some form of a personal signature,” Clarke said. “Some form of saying, ‘I’m here, this is who I am.’”